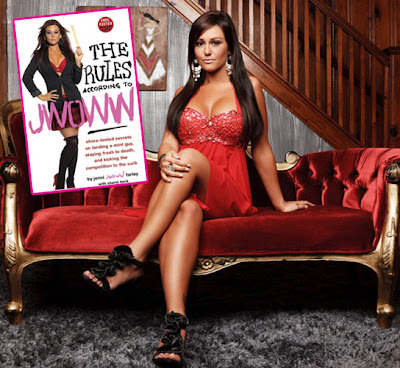 When I found out that I was being sent my very own autographed copy of JWoww’s “The Rules”, I was really excited to read and review it. I have my own set of “rules” when it comes to dating and relationships. We all do. I was curious to find out what my favorite tangerine hued vixen’s were & if any of them involved stuff like “thou shall always wear underwear even when you are dancing the Jersey Turnpike“. Basically, I thought the book would be a total train-wreck. To my surprise, most of JWoww’s rules were all based around having self-respect & confidence. The more I kept reading, the more I kept nodding in agreement – so much so that at one point I actually said to myself “Is this going to be a boring read? Where are all the WTF moments I was hoping for?!” Don’t worry, I did eventually come across some stuff that made me say “WOWW” and now I am ready to share.

Here are a few of my favorite “Rules”. I’ve divided them into two separate categories and provided my comments below each quote in italics.

Deal with rejection: “You should never let the fear of rejection hold you back. It’s a lame excuse; rejection won’t kill you, it will only make you stronger. Maybe its not you. Maybe he’s just a dick and you need to keep moving”

{She’s right. Yes, being rejected sucks but all it means is that they weren’t the right person for you anyways. Just keep it moving and eventually you will find someone who is right for you}

Bust his balls a little: “I’m not saying torture the poor sap for fun- just make him work for it”

{ I want to add this: you need to be comfortable with “asking for what you want” out of a relationship. For years, I was the kind of girl who let guys walk all over her. If something bothered me, I didn’t speak up because I was afraid of rocking the boat. It took dating the Kite Surfer to make me realize that the only person I could count on to stick up for for me was ME. Learning to ‘bust some balls’ every now and then has made me a lot happier}

If you break up, trash the reminders: “Get rid of it [reminders of your ex]. Rip it, shred it, burn it, stomp on it, throw it in a garbage bag and pour marinara sauce on it”

Let go: “I have come to the conclusion that there is no good reason to hang on to heartache, hatred or regret. All it does is make you miserable…You took a chance, it didn’t work out this time. Move the fuck on….My advice to you is this: do your bitching, moaning, crying and hibernating…then pick your ass up, dust yourself off and get on with your life”

{I agree that sometimes we allow ourselves to be miserable for too long. It’s important to mourn the loss of the relationship but, after that’s done, push yourself to move on. Sometimes that means going cold turkey and cutting all contact with that ex. Hanging on to them often means hanging on to feeling crappy}

Reheated pasta never tastes the same. “When you try and serve it on Tuesday it just ain’t as good. The same goes for relationships. If you re-kindle your ex-files, do not expect things to be the way they were when you were first together”

{Sleeping with your Ex is never a good idea. As someone who used to be a chronic “pasta re-heater”, I speak from experience}

Learn to like sports to impress guys: “I strongly suggest becoming a baseball or football fan or at least learning the difference between a home run and a touchdown so you can make conversation”

Hair Extensions are a girl’s best friend: “I couldn’t live without ’em”

{It’s not uncommon to see girls in Toronto sporting a $700 leather jacket, $300 jeans, an $800 purse AND tangle ridden, broken off, ratty hair extensions. This makes me think – if people with serious bank can’t pull off this look, what hope do the rest of us have? I’d rather deal with my fine, slightly thin real hair than risk looking like Britney, “the crazy years”} 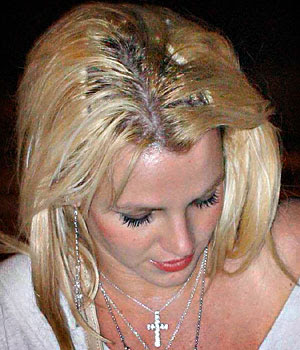 Get a boob job: (When you break up with a guy) “Go for a makeover- lose weight, get a new haircut and color, hot clothes, even a boob job. Just make sure you’re doing it for yourself…not for him”

{I’m a huge fan of the post break-up haircut. When you feel like shit after a break-up there is nothing like going to the salon, getting pampered and walking out the door a few hours later looking amazing. I’ve done this many times in the past partly “for me” (because it feels good) but also because a teeny, tiny part of me hopes that I’ll bump into the breaker-upper & he’ll eat his heart out (haven’t we all been there once or twice?). When our hearts are broken, can we ever really be 100% sure of our motivations? Getting a hair-cut is one thing, getting body altering major surgery is another. My advice: use the 5K you were going to spend on your new boobs and TAKE that amazing trip you’ve always dreamed of. DO THE WHOLE EAT PRAY LOVE THING. Once the sting of the break-up is gone you’ll be thankful for the experience that allowed you to grow as a person not just as a cup-size}

Wear padded underwear: “If you’re lacking in the curve department, they even make panties these days that come with a little extra fill where you need it…But, make sure you’re doing it for yourself, not him”

{For a brief 6-month period when I was in high school, my family home was the accidental recipient of many Frederick’s of Hollywood catalogs. I remember curiously leafing through the pages until I came across the section that featured Women’s panties with padded bums. I showed it to my Mom and asked her:

My Mom’s reply: “I think they’re for female impersonators Simone”

Um, thanks for clearing that up Mom but, clearly you’re mistaken! I don’t even like wearing overly padded bras because to me it seems like false advertising. The last thing I want to see is a look of disappointment when a guy takes off my bra. I’m more of a “what you see is what you get” kind of girl. With that said, imagine you are undressing your date and you find this: 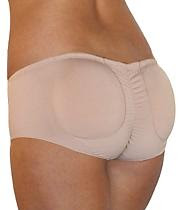 OR THIS. {For the guy who wants a little extra in the front & the back} 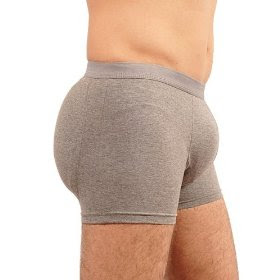 How is this possibly a good idea?

No, really buy some boobs already: “There are plenty of padded bras out there and plastic surgeons who can work miracles…I wanted boobs that defied gravity and boy, did I get them! …I bought them for myself for my 21st birthday”

{Jwoww repeatedly mentions in her book that things like drinking, partying & sex should only be done by people over the age of 21. But, there doesn’t seem to be a similar disclaimer in regards to plastic surgery. There is no mention of the risks and complications associated with getting implants or that its LIKE, ACTUALLY A BIG DEAL and something you may regret later in life. This seems really irresponsible considering how young her audience is. My body has changed a lot since I was 21. I filled out. I now have hips & an ass & boobs that are two cup sizes larger (naturally). At 21 my body still felt slightly awkward now, I’m proud to say I feel comfortable in my own skin. All I’m saying is: think before you go under the knife because things change}

JWoww keeps reminding us that she is a “bad-ass bitch” who doesn’t take shit from anyone but, with chapters like “Fake Nails 101” and “What to do if you Fuck Up Your Fake Tan” it seems like a huge chunk of her book is devoted to all the stuff you need to do in order to get guys to want you. JWoww claims that if you tan yourself until you look like a turkey that’s just been pulled out of the oven, put on tight clothes, talk about sports you don’t care about and wear multiple fake body parts you will score the man of your dreams . However, if you do all this stuff I’m thinking the only guys you will attract are the ones on the Jersey Shore. But, I guess that’s the point.

What are some of your personal “rules”?