Home » Why Broken Hearts are Sometimes a Good Thing

Micah of Unabashedly Me has written her own list of “Things I would tell my 20-year old self“. Instead of writing a list, she has written a letter to herself. I really enjoyed reading it and you can check it out here (pssst. If you decide to write your own list or letter let me know so I can share your link). My favorite part of her letter was this:

“[some of the guys] will break your heart. Intentionally. They have to. It’s the only way for them to get you to move on. And you will“

This made me think about the idea of heart-break and why sometimes heartbreak is a good thing.

Last week, I received a Facebook friend request from the first guy who broke my heart. I was 18 and he was the second guy I ever dated. He was older than me and was obsessed with working out, rollerblading and tanning. He frequently didn’t wear a shirt, had crunchy gelled hair and tanned so frequently that up close his skin always smelled a tiny bit like cooked meat. Think Ronnie from the Jersey Shore, the Asian version – minus the propensity for breaking patio furniture. My parents and friends thought he was kind of a dolt but, I was “in love with him” (in reality I think I was just infatuated and revved up on teenage hormones but, at the time I couldn’t differentiate between the two). When he broke up with me while we were standing in front of a bus shelter one night, it felt like my heart had been ripped from my chest. I refused to accept the break-up and begged him to reconsider. When that didn’t happen, I spent hours in my room crying and listening to sad music of the crooning-Boyz II Men-variety. It was the late nineties and this was not my finest moment AT ALL.

Eventually, I got over it and returned to enjoying my life as an 18 year old girl. I had my best friends to hang out with, a fake ID to make use of and many new boys to keep me occupied. By the time I started university what had once been “the worst thing ever” (him breaking up with me) now seemed laughable.

Flash forward to last Thursday when curiosity got the best and I accepted his friend request.

One of the first things I saw on his page was this: 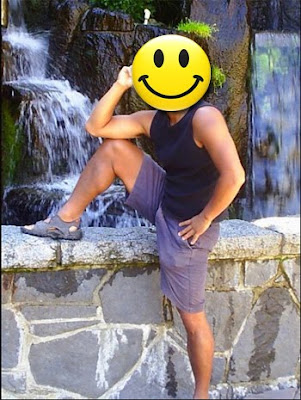 What is he doing?! Is he stretching?! WHY IS HIS LEG SO HIGH. So many questions. OMG. WHY IS HE POSING IN FRONT OF A WATERFALL?

{FYI. underneath that happy face is a pair of “sick” wrap-around shades but, I’m sure you already guessed that}

Once I had finished laughing, my only thoughts were:

“That heartbreak was worth it”

He had to break up with me so that he could move on (to Australia where the UV rays are stronger) and so I could grow up and become who I am today.

I moved to Toronto & gained life experience outside of my small hometown & discovered what it was like to really fall in love with someone. So..

Thank you for breaking up with me.

I’m not one of those people who believes that absolutely “everything happens for a reason” nor, do I think the universe is completely random. Things happen that can’t be undone, hearts get broken & you just have to accept it and move on with the blind faith that it was all for the best.

Let me just point out:

This was definitely for the best.