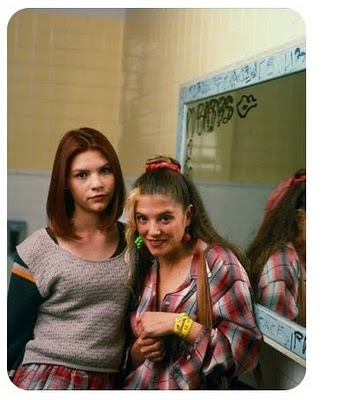 Its been over 10 years since I graduated High School. Since then, I haven’t spent much time thinking about that era of my life. However, over the holidays a few things happened that made me reflect (for the first time in years) on the experiences I had in my early teens. First of all, my sister downloaded the complete series of My So Called life, which we watched together in big greedy helpings. Oh, how I love that show. Watching it as a 29 year old was just as (if not more) enjoyable as watching it the first time around. I feel like the show really captured the awkwardness of being a teenager, or at least how I felt as a teenager. Side note: 15 years later, I still wish Ricki was my Gay BFF in real life.

“Fast Girls: Teenage Tribes and the Myth of the Slut”. This sent me on another trip down High School Memory lane, albeit a slightly darker one. In her book, White argues that the myth “School Slut” is something that exists almost universally in North American high schools. I’m sure you remember the “slut rumors” from your own high school. They usually sounded like this: “I heard she did the whole football team” or “Someone told me she 69’ed five different guys at one party”. No one ever questioned whether the rumors were true. She’d been labeled a “Total Slut” so the rumors “HAD be true”. Sound familiar?

White argues that the archetype of the slut is merely a symptom of our society’s complicated and often twisted views of female sexuality. For teenagers, talking about “sluts” is a way of dealing with all the confusion, fear and curiosity that surrounds sex. The stories about “the slut” are told and re-told to the point that it no longer matters if they are true or not. The “slut” becomes an archetype. This is true for other labels dolled out in high school: FAG, LESBO, FREAK, NERD. These are all identities that are reproduced through gossip, rumors and bullying. By ostracizing a common designated “outsider”, teens are able to form a shaky sense of belonging.

High School is a mean place.

Did this happen at my school? Although my high school didn’t have one particular girl who was “the school slut”, there were several people who were “notorious” and “talked about”. There was one girl who apparently “drank a whole bottle of tequila then threw up all over the computer lab”. She was immediately labeled “A Total Alky”. I wish this wasn’t how I remembered her.

Here are a few things that I learned from my high school experience:

1. High School is full of

“definining moments” or I should say, social land mines. Do anything remotely interesting and it has the potential to shape your entire social identity. Unless you are the school Quarter Back or Prom Queen material, usually these defining moments are somewhat tragic and embarrassing.

2. It doesn’t even matter if you did this “thing” or not. What matters is how people talk about what you “did” (or didn’t do).

3. You can become a Slut, Bitch or Freak with no explanation, for literally doing absolutely nothing.

So who was I in High School? I wasn’t the School Slut or the School Drunk (in case you were wondering). However, I will tell you the story of my High School “land mine” moment:

It was the beginning of grade 9. Things were looking up for me. I no longer had braces, I’d traded my glasses for contacts, I was dressing better, I had boobs…I was starting to feel ..well, cute. I had a small group of girlfriends that I liked. I figured this was going to be MY YEAR. I was going to be popular, get a boyfriend and hopefully kiss Soccer Boy (my crush at the time who had an affinity for Adidas nylon jackets and shorts. Don’t ask. The 90’s were not pretty). The night of the first dance of the year I spent an extra long getting ready. I thought I looked pretty good. I knew that SOMETHING BIG was going to happen that night. Maybe Soccer Boy would finally notice I was alive??

At the dance I saw RR, a boy who was a grade ahead of me. RR was a boy who hadn’t really grown into his looks yet. He was short, pudgy, with pug like features and unsightly peach fuzz. My friends and I thought he was funny looking. He was the kind of guy NO girl in her right mind would consider “boyfriend material”. We’d make fun of him behind his back and call him “Mr Personality” (after the

Gillette song of the same name “they call you Mr Personality, because you’re so UGLY!”). We were horrible. I always felt bad about this because if you talked to him, he seemed like a pretty cool guy. When he asked me to dance I said yes.

We were dancing to “Stairway to Heaven” when I felt what I thought was his wallet pressing into my leg.

When it came to boys I was inexperienced (bordering on oblivious). Then, I felt something hot and wet crawling up my neck. What was going on?! That’s when I finally clued in that the “wallet” wasn’t a wallet and the thing on my neck was his LIPS. I pulled away. Before I could really register what was happening I saw a giant set lips and 26 shining white teeth coming towards my mouth. What happened next can only be described as him sticking his tongue down my throat while he simultaneously tried to eat my face. That my friends, was my first kiss. It was confusing and strange and exciting and horrible and disgusting all at the same time. And everyone I knew was there to witness it.

I pulled away and ran out of the gym.

I felt humiliated. I KNEW I had just committed social suicide. My high school fate was sealed in the worst way possible.

The next day at school I just wanted to forget what had happened. But, the universe had other plans. Friends and people I barely knew came up to me and asked me “Why would you DO that?! That’s so DISGUSTING”. Other people just looked at me really strange. I’d overhear girls whispering calling me a “Freak”. I had a few friends who defended me, however it didn’t matter,

I felt like a Freak. I found through my friend, that prior to the dance, she’d overheard RR talking to his friends about me. She said that he’d told them that he thought I “looked easy” and like “a good one to rape”. So, RR was in fact a total creep. Not that I blame my friend at all ( I am actually THANKFUL for her –she was one of the only people who stuck up for me) but that’s INFORMATION THAT WOULD HAVE BEEN USEFUL AHEAD OF TIME, you know before I filled up my dance card. While he was getting high fives from his buddies for hooking up with “the girl who looked easy”, I understood for the first time what it felt like to be objectified. I confronted him, told him (in true High School drama style) that he’d “ruined my life” and to stay the hell away from me. Around the same time, another “friend” of mine started calling me a “bitch” and a “slut” whenever she’d see me in the hallway. Once she slammed me against my locker. I didn’t even understand why she was doing these things (I mean if you’re going to insult me come up with something that actually makes sense. “Freak” made sense, “Slut” didn’t). School became a really unpleasant place.

White argues in her book that teenage girls are sold this fantasy of prom dresses, teen romance & perfect BFF’s. When reality fails to deliver this idealized experience, girls often feel like they have been cheated. This was exactly how I felt. I felt like I had been denied what I thought was the “normal” high school experience. It wasn’t until later on that I realized that my feelings of unacceptance, isolation and malaise WERE the normal high school experience.

I got angry, I started listening to bands like

Hole and Bikini Kill because I could finally relate to their lyrics (“Was she asking for it? Did she ask you nice?”). The “Live Through This” album was my bible that year. On the outside I tried to be as normal as possible, to smile and put on a good face. But, part of me still felt humiliated and ashamed about what had happened.

During this time, a friend of mine died. I was devastated, crushed, grief stricken. After this happened I slowly stopped trying to make things right at school. I slipped deeper and deeper into myself. I went to school as little as possible and spoke only when neccessary. I’d come home and cry every day after school. This is by far the lowest I have ever felt.

After 10th grade I decided that the best thing to do was to move schools. I moved from my mostly white suburban school to the more socially diverse school located in the inner city. I met a bunch of new people that I really liked,

many of whom were also there to make a fresh start. I started getting involved in drama, and acting in school plays. Finally people knew who I was, but in a good way. After everything, I finished High School on a positive note.

Lately I’ve been wondering, has this experience impacted how I am as an adult? Sometimes I still find myself overly concerned about what people think of me and what image I project to others. I’ve learned the best way to overcome this is to take ownership of your life and be yourself. I will TELL YOU upfront that I’m a total nerd. I will blog about my sex life. By putting it all out on the table there isn’t as much room for speculation. If you still want to form a bad opinion of me, or cut me down–that’s on you. My life and experiences are my own. I’m not going to waste time letting someone else make me feel ashamed. The big thing I have learned is this: having a rough time in high school has made me appreciate everything that came afterwards. Even though there have been ups and downs, I’ve really enjoyed the past ten years. I’ve made lots of great friends and have enjoyed the freedom of being able to shape my own identity. For those of you who are still in high school, words of advice: the people who tell you “these are the best years of your life”– they’re lying.

How do you feel about your High School experiences? How have they shaped who you are today?