Home » Where I get Sexually Harassed ..by a WOMAN 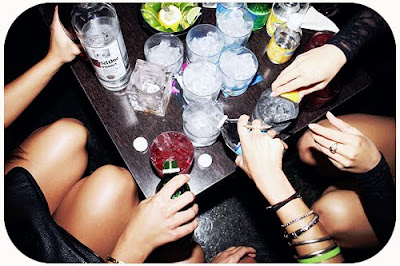 As originally planned, Saturday night I put on my highest heels & my LBD and headed out for a night of debauchery with Melissa.

I found out at the last minute that Rebel Man was in town for the night so, Melissa and I met up with him and his friend for drinks on the Spice Route patio. We haven’t seen each other in over a year so it was really nice to catch up. Hopefully his friend wasn’t too traumatized when I busted out the “When Blogging about Sex gets Weird” stories (“Someone recently asked me how often I thought it was normal to masturbate. I wasn’t sure how to answer”). That’s me: making friends and scarring people for life wherever I go.

After drinks at Spice Route, Melissa and I took off to a different club to meet some other friends for some late night dancing. While standing in the line-up we noticed something: with the exception of us and maybe 2 or 3 other girls, everyone was MALE. Melissa looks at me and says:

“What’s with all the Dudes?!”
“I guess its Sausage Party night at Footwork“

We spent the next 10-minutes coming up with other sausage-related comments:

“It’s Oktoberfest…in May“
“I feel like I’m partying in a Polish Deli”
“There’s more weiners here than at a Gray’s Papaya“
“It’s like Sausage-Pocolypse Now…wait, that one doesn’t really work”

Inside, we grabbed drinks and headed out to the dance-floor. Within seconds we were surrounded by guys….very eager guys. These guys seemed hungry, like they hadn’t seen real live women in years. This prompted my favorite comment of the night:

After briefly conversing with some of these dudes, we discovered that we had actually landed ourselves in the middle of a massive Bachelor Party. Of course we did.

The upside of being a female at a Bachelor Party: there is a good chance you won’t have to pay for another drink all night. The downside: You will probably end up refusing most of these free drinks because (if you’re like me) you’ve watched too much Veronica Mars and now equate “free drinks” with waking up without your underwear. That, and might get stuck in conversations like this:

Before I go any further: I don’t want this to be another post about about how I went out and met “some guy” who acted like a douche-bag. I’ve written that post before. I could write it again but, that would be boring. The guys are not the ones to be blamed here. I’m just going to jump ahead to what happened next:

Eventually, we managed to migrate away from the Tube Steak zone, towards another area of the club where we had noticed a small group of girls dancing together. Little did we know that we had landed in a new “zone” that I like to call:

“Bi-Curious Girls (probably high on E for the first time)”

Melissa and I were dancing when a tall girl in a bustier dress leans into me and says:

We continue to dance. Then, I notice the same girl is moving in closer & closer towards me. Then, I felt it. HER HAND. GRABBING MY LADY PARTS.

Girl on Girl action.
Guy on Guy action.
Whatever you’re into.

What I’m not cool with is having uninvited hands between my legs.

I yelled out “WHAT THE FUCK!”

I grabbed Melissa and got as far away from the scene as possible, hurrying over to the bar to get a drink. A stiff one.

Later, I ran into the “perpetrator” in the ladies room, where I had one of the most awkward club bathroom conversations ever:

Her: “Your dress is really cute”
Me: “Thanks, yours is too”

I felt kind of bad for her. I didn’t want to be that person, you know like in movies where the token gay guy makes a move on his friend only to have his friend freak out & yell “Get your hands off of me you sicko!” which sends him hurtling back into the closet or worse (I think we’ve all seen the end of American Beauty). But, at the same time she needs to know its not OK to just grab people’s crotches. My guess is that she wasn’t gay…just high. Very high. I’m basing this assumption on the fact that the bathroom looked like the freaking North Pole. Every single flat surface was covered in a white powdery residue. Oh, the places I find myself on a Saturday night… 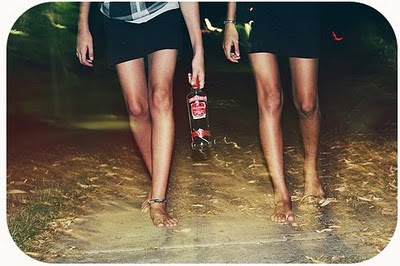 Yesterday I woke up feeling surprisingly good. I treated myself to a massive breakfast at the Greek Diner near my house then walked down to Trinity Bellwoods Park where I spent the afternoon reading in the sun.

This weekend I got sexually harassed by a woman, lost all feeling in my left baby toe (oh, I didn’t mention this. Not sure what happened but I think it has something to do with the shoes) and still managed to have a pretty awesome time with friends.

Whatever woe-is-me funk I was in last week seems to have passed.

So, how was your weekend?