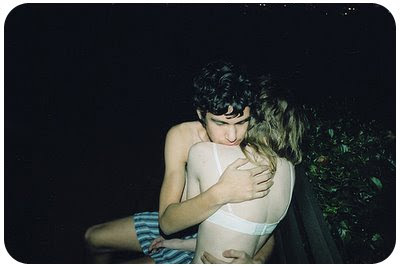 On Friday night I found myself at Lee’s Palace, celebrating Halloween with a few friends.
The last time I set foot in Lee’s Palace was six years ago. It was the night after THE incident involving Mr. I.S.I.T.I.B.. I was there with my friend Nick.
Nick and I met at U of T. We were in an English class together and hit it off right away. He stood out from the rest of our horn-rimmed be-speckled, Lacoste wearing class mates. He was frank, outgoing and swore like a sailor. He was also scruffily handsome in an Italian Sam Roberts kind of way. I always felt comfortable around him. With Nick I could drink beer, also cuss like a sailor and just be myself.
{photo: Hug by Erin Nelson}
I knew he found me attractive, however neither of us ever made a move. There was chemistry there, but for some reason I always held back. I can’t quite explain why. It was like there was an important puzzle piece missing that I couldn’t put my finger on. Can you ever explain these things?
That day, after I parted ways with Mr. I.S.I.T.I.B, I walked back into my apartment and answered a call from Nick. I told him everything that had just happened. His response:
“He fucking said that?! While he was still inside of you?! FUCKING BLACK RAGE!”
Nick had nicknamed him “Black Rage” after he had heard stories about Mr. ISITIB’s racial politics. When I told him about the “track suit comment” he replied:
“You’re a pretty White girl. You don’t need some motherfucking asshole with his post-colonial bullshit making you feel bad about that. You know what? You probably need a drink. You shouldn’t be alone tonight. Lets go grab a beer”
He was right. So I threw on a white wife beater, some tight jeans & my going-out shoes du jour: a pair of red pointy toed stilettos and met him at Lee’s Palace.
We leaned against the wall of the Dance Cave, drinking beer, smoking cigarettes and listening to The Smiths play in the background. Although I was grateful for the company, inside I felt broken, shellshocked. When the conversation swung back to the events of the day and he could tell I was still really upset, Nick said:
“No one should ever treat a woman that way. It’s just fucked up. Please don’t take this the wrong way. I’m not trying to mack on you but, I just think that you really need to be held tonight. You need someone to treat you good and with respect”
And that’s exactly what he did. He dried my tears, took me back to his apartment, gave me a pair of baggy flannel pajamas and tucked me into his bed. When he climbed into the bed, he kissed me goodnight on the cheek and wrapped his arms around me. We woke up the next day, in the same position, fully clothed.
In the morning, he got up and made me bacon and eggs (The “we just had sex breakfast” minus the sex). Over breakfast he told me,
“I know I’m not really your type. I don’t have a nice apartment or fancy clothes. I probably will never own a Rolex or a nice car. But, I would never treat you the way those other guys would”
“I know”
“And if you’re not going to be with me, then you should at least go for someone good. Like that other guy you were telling me about, the one with the good job and the house. It sounds like he might actually deserve a chance and like he might actually treat you the way you deserve to be treated. Just whatever you do, promise me you won’t go back to Black Rage”
“I won’t. I promise” (It was the truth)
He hugged me, kissed me on the head and sent me on my way.
Hindsight is always 20/20. I think Nick actually cared a lot about me. But, my head was just too far up my own ass to see it or appreciate it. At the time, the idea of someone who actually truly cared for me terrified me to death. It was easier to just keep chasing the next best thing. I thought I was looking for love, but really I wasn’t. As I discovered a few years later, love means really opening yourself up, making yourself vulnerable and letting someone else call you on your own personal bullshit. I wasn’t ready for any of that.
Nick and I lost touch after university. The last thing I heard he was teaching English in Asia.
So, Nick–if you’re out there in internet land, thank you. You looked out for me even when I wasn’t looking out for me. I hope wherever you are that you find what you are looking for out of life. You’re good people and you deserve to be happy. Oh sorry, I mean…
You fucking deserve to be fucking happy!
Hindsight is always 20/20. Is there someone from your past that you now see in a different light? What would you say to them if you had the chance?