Home » The We-Vibe and Vagina Disses 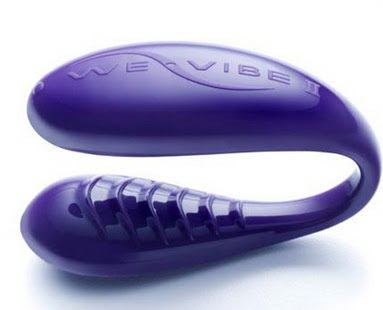 This Spring I went a little sex toy crazy.

It wasn’t long after I purchased my beloved Lelo Mona that I decided that I absolutely needed to try the We-Vibe. Like, RIGHT AWAY.

If you don’t spend time online reading sex-toy reviews (like I obviously do) you’re probably wondering “What’s the big deal with this We-Vibe thing?!” Let me break it down: the We-Vibe is a vibrator that you can use solo OR while you’re having sex with a real live person. Confused? Watch the explanation video! The toy has won all kinds of awards and has received glowing reviews (no pun intended). Also, it was designed by Canadians – which seems fitting, considering we are a culture that is trapped inside for most of the winter. What else are we going to do?!

I became a bit obsessed with procuring a We-Vibe of my own.

On a sunny Sunday afternoon I headed out into the city in search of this toy that had been described to me by a friend as “the guaranteed cum shot”. The only problem….it seemed to be sold out in Toronto! NOOOOOOO! This only made me more determined. I spent the afternoon driving around the city from sex shop to sex shop, where I was politely told that the toy was on back order. I then spent a good hour or two at Remy’s patio drowning my disappointment in some really bad overpriced sangria. I’m very determined. Once I get an idea in my head that I “NEED” something, I won’t rest until I find it. (Currently, I am searching for the perfect maxi dress to wear to a pool party in two weeks. I will find it. However, sangria might once again be required.)

(I swear to god, most of my Sunday afternoons don’t look like this….just some of them)

I wasn’t planning on doing a product review of the We-Vibe but, I need to at least give you guys the Coles Notes version so that the rest of this story makes sense. So here it is:

BOTTOM LINE: I think I am probably the only person on earth to say this but, I was really

underwhelmed by the We-Vibe.

The first time I tried it was with BF. When we first put it in and started to have sex, we were like “This feels pretty good!”. But, the more we got into it, the more annoying the We-Vibe became. The We-Vibe just wouldn’t stay in one place. It kept slipping and sliding around with every thrust. We would have to stop what we were doing to re-adjust it, which turned into a bit of a mood killer. Also, I really wanted to experiment with the different speeds settings, but I found it really difficult to switch settings without stopping everything completely. Eventually, the We-Vibe was more of a distraction than anything else. I had this moment where I was like, THERE IS WAY TOO MUCH GOING ON. GET THIS THING OUT OF ME (the We-Vibe, that is). We ended up yanking the toy and finishing things the good old fashioned way.

For me, the We-Vibe was the sexual equivalent of the Turducken. It takes something that is already good (Sex/Turkey) and then stuffs in a bunch of stuff that doesn’t really need to be there.
I’ve played with the toy a few times on my own which, I have enjoyed a lot more. Alone, I had more control over the toy. The We-Vibe is pretty flexible so I was able to bend the arms so that they hit the right spots without having to worry about slippage. Overall though, my main complaint about this product (something I noticed the first time I used it as well) is that even on the highest setting, the vibrations just aren’t strong enough for me. I’m used to a toy with a bit more power which is why I love my Lelo. It’s not that this toy was terrible (it will get you off), it just wasn’t the giant-orgasm-holy-grail that I expected it to be. We-Vibe, I’ve had better.

I was at a networking event with my friend. It was a very girly event: there were lots of pink martinis & a bunch of different vendors with tables set up throughout the club. One of the vendors was a company that sells sex toys. Naturally, I had to go and check it out. One of the toys they had sitting on their table was the We-Vibe. So, I decided to strike up conversation with the girl that was manning the booth. I told her that I had purchased it, that I found the toy slipped around a lot & asked her if she had received similar feedback from other customers. Her reply was,

“I’ve never heard that. Maybe you need to like..

.tighten up your vagina“

“Um, I’m pretty sure my vagina is FINE. The toy just didn’t work for me”

“I know but maybe your vagina is kind of..

She gave me her card and I walked away thinking:

“Did that conversation really just happen?!”

So, words of wisdom:

If you want to be my friend, work with me, or have me promote your products on my blog:

(And now that I’ve managed to say the word vagina a 8,00000000 times, I’m off to enjoy the sun. I hope everyone else is having a fabulous weekend!)

Has anyone else tried the We-Vibe? (or maybe had an equally as awkward conversation recently?)