When Eden Fantasys first approached me about what kind of sex toys I’d be interested in reviewing for them, I told them:

“Send me one of your Rabbit Vibrators!” 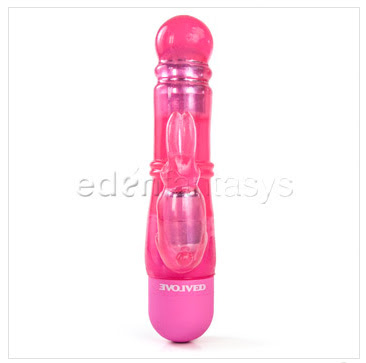 I know. I know. I know. I just wrote about how sex toys that are shaped like animals totally creep me out. In my defense, this toy passes the “no googly eyes” test and definitely looks like it belongs in the bedroom of an adult. Also, weird fact: I’ve never tried a “Rabbit Vibrator” even though its kind of famous and I’m sure many of you own a version of this toy. When I was in university, I remember watching the episode of Sex and the City where Charlotte becomes addicted to her Rabbit vibrator and thinking “I want one”. However, when I came time to buy my first toy, all of the Rabbit styles available at the time were well beyond my starving student budget. Instead, I settled on a cheaper, single function vibe that in retrospect kind of sucked. Years later, when I became interested in sex toys again, instead of going for a classic Rabbit, I opted to try more intermediate, specialty stuff like the We-Vibe. Which, I guess is the equivalent of going to a sushi bar, having one avocado roll, jumping ahead to clam sashimi and tuna tataki then, ten years later trying a California Roll for the first time (which is actually the true story of how I tried sushi). It was time to try the Rabbit.

Dual function! You get some action on the inside as well as some much needed attention to your happy button. Although I was initially creeped out by the fact that it looks like wildlife, that little rabbit is really, really nice. The toy is also really flexible so you can easily move it around, allowing the rabbit part to hit different spots for different sensations.

It will get you off. The first time I tried it, I came within 30 seconds. I’m not kidding. Either I just have orgasms really easily (which I know is kind of true) or this toy is actually really good at what it does. (probably a bit of both).

The price! It’s fantastic. I actually didn’t know how much the toy cost when I tried it. I only checked after the fact. When I saw that it was only $39.99 USD, I couldn’t believe it. Considering most of the toys I own now are over the $100 mark, this toy is excellent value and packs a punch for the price.

It also comes in this cute metal tin that’s covered in pink, vaguely Ed Hardy-esque designs that I really want to hate but don’t for some reason. I can’t explain it. Don’t tell anyone I used the word “Like” and “Ed Hardy” in the same sentence.

The tip looks like a lollipop which kind of just makes me want to go to the convenience store and buy candy. This also cues serious feelings of regret that I didn’t buy one of those Britney Spears lollipops I saw in Vegas. I’m not sure if this should be in the Pro or the Con column.

Caught in a Bad Romance:

(The less than awesome points)

The makers of this toy promise that the True Love Honey Bunny offers “maximum vibration with minimum noise”. They lie. This toy is comically loud. After using this toy three times this week (a writer has to do their “research”) I’m convinced my neighbors think I’ve either a) decided to open my own fly by night dental clinic. It doesn’t sound like someone is getting off in my bedroom, it sounds like someone is getting their teeth drilled OR b) I’ve decided to get in touch with my inner Bob Villa and start up a bunch of evening wood working projects. Unless you want the people you live with to think you’re trying to corner the market on amateur black market dentistry OR that you’re just a weirdo who likes to masturbate all the time, this might not be the ideal toy for you.

I found the speed settings on this toy slightly frustrating. The True Love Honey Bunny has three different speeds, each featuring the same kind of vibration just at different intensity levels. After my fourth orgasm (I TOLD YOU THIS TOY WORKED), I wanted to switch things up. However, when I tried to go from the highest speed to the lowest, it meant that I had to turn the toy off completely – the speeds didn’t cycle through in a continuous loop. As someone who’s been known to call out “Faster, Harder!” in bed, once I was 4 to 5 orgasms in, the highest setting wasn’t strong enough for me. I also would have enjoyed if the toy allowed me to cycle through different kinds of vibrations while controlling the speed like I can with my Lelo Mona.

Something to also note about this toy is that its bullet shaped (its straight as opposed to curved). The shape of the toy meant that it didn’t hit my G-spot the way it could have had there been a bit of a curve like some of my other toys. But, as you can see from above – that didn’t stop me from enjoying myself.

Who would enjoy this toy:

I think this toy is a great for beginners. The vibrations are strong enough to get the job done but not hard enough to be intimidating. It could also be good for someone who is looking to add a dual function toy to their repertoire but, doesn’t want to blow the budget. The dual function feature really does make a difference. I wish this toy had been available at this price point when I was looking to lose my toy virginity many years ago.

The only drawback for some beginners is that this toy isn’t small. It has a fairly large girth (in a good way!). Some of you will probably want to use some lube with this toy.

Although this toy is called the “True Love” Honey Bunny, I don’t think I’ll be fantasizing about picking out china patterns with this rabbit anytime soon. If this toy was a guy it would be that dude that you call sometimes – he’s kind of hot, maybe slightly dumb and the conversation is always terrible but he’s really well hung and knows how to get the job done. True Love no. Summer fling, maybe.

Have you guys tried any toys lately that you really like? What toys are YOU interested in seeing reviewed?

*Eden Fantasys sent me the True Love Honey Bunny free of charge in exchange for my honest assessment of the product.