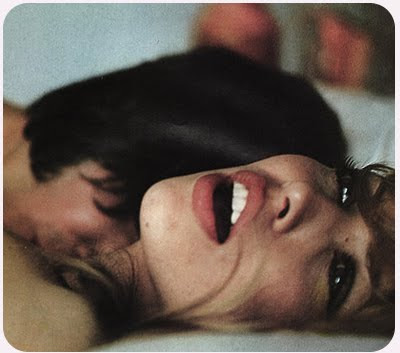 I have this neighbor. We’ll call her S.W. After a year and a half of listening to the sounds that come through the walls, I’ve concluded that her sex life is totally insane.

Remember when I said that I wasn’t a screamer? This girl is a screamer. I’m going to try my best to describe the sounds I’ve heard coming from her apartment. First of all, she is LOUD. Her sex noise repertoire includes lots of high pitched squealing, your typical standard issue moaning, CREEPY GIGGLING, something that sounds like this: AH!AH!AH! OH WEEEEEEE! OH WEEEEEEE! And the occasional high pitched, nasal “FUCK ME! FUCK ME! FUCK ME! OHHH WEEEEE!” Sometimes things get really crazy and it sounds like furniture is being broken, things are getting smashed, bodies are being flung from one end of the apartment to the other or as BF once said “It sounds like rabid animals are attacking each other…but I think she’s just having sex”.

The weird thing is that it doesn’t happen all the time. It goes in “cycles”. You won’t hear anything for a few months and then BAM. It sounds like that scene from True Blood, where everyone is possessed by demons & wasted & partying naked & fucking each other in the middle of a field…except its all happening on the other side of your wall. AH AH OH WEEEEE!

This will happen a few nights in a row. Then, everything will screach to a halt & you won’t hear anything for a few months. This prompted BF to say to me one day:

“I think she follows the cycle of the moon….its like she’s a Sexual Werewolf or something”

Theres definitely something supernatural going on here. This winter she went through a particularly “active” cycle. The noise got so bad one night that BF went into the living room, grabbed his hockey stick and started banging it against the ceiling, until eventually things subdued.

(We’re Canadian. This is how we deal with things.)

Unfortunately her “transformations” happen at the most inopertune moments. For example, when my Mom is visiting. S.W’s bedroom is adjacent to the guest room/office where my Mom spent several very sleepless nights. My mom who was taught by nuns, (and whom I like to consider a saint when it comes to all things sex) commented that “it all sounded really…gross“.
Um yeah.

The worst is when it happens WHEN YOU’RE TRYING TO HAVE SEX. Not long after the Hockey Stick incident BF and I were in bed having sex. For a moment when I first heard the noises I thought that maybe the sex was so good that I was having some kind of weird sexual out of body experience where I had actually kind of blacked out a bit and was hearing MYSELF. But, then I realized that I could hear three people making noise: me, BF and S.W. Now, when it comes to making noise in bed, I’m about average: I’m not quiet but, I am no S.W. I’m not going to lie: at first the noises kind of turned me on. Then, I just started to feel jealous. I mean, she always sounds like she is having THE BEST SEX EVER OF HER LIFE …ALL THE TIME (either that or she’s a good actress). But, when she started to get so loud that I felt like she was actually drowning out my orgasm, I got annoyed. I was ready to get all ghetto, take off my rings, march up to her door and say “Look, Missy – there are other people trying to come in this building!”. But, I didn’t because that would have required me to stop having sex…and who wants to do that? 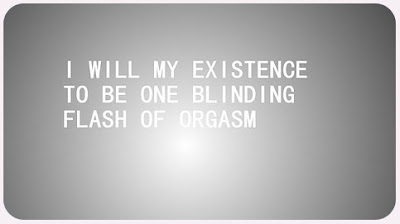 A few months ago, we were having a backyard BBQ with our downstairs neigbours (Sam‘s mom & aunt – the coolest 40-50+ year olds around), my friend Trevor and his husband. I guess S.W had neglected to shut her screen door because we were chowing down on some homemade bison burgers when IT started.

As a disclaimer: I do like my neighbor. She’s a cool girl. I’m pretty sure if she read this she would consider it like a sexual badge of honor. She should. I would. And to the guys: if you want me to set you up with her, the answer is NO (someone already asked). If I set you up then I would probably have to hear YOU too. NO THANKS. As my mom would say, “That’s just…