Here is another “get to know me” post courtesy of Teacher Girl Blogs and the Ten on Tuesday (which I am posting on a Thursday. Go figure). The theme today is music:

1. Do you listen to the radio in your car? If so, what type of station do you like? I don’t own a car or drive. I live downtown so I don’t really need one – I can walk or take the subway everywhere I need to go. If I’m out and about, I’m always listening to my iPod though. Whenever I’m in my mom’s car (which is almost never) I will always try and change the radio to the Seattle urban (R&B, hip hop) station.

2. What is the best concert you have ever attended? The first “real” concert I ever went to was Erykah Badu at Massey Hall in 2000. Her Mama’s Gun album was pretty much my bible during first year of university. When I found out she was playing in Toronto I knew I had to see her. Bummed out that no one would go with me, I put off buying tickets. The day of the show, I decided to throw caution to the wind, went down to the theater and bought the second to last ticket available – second row, center, way more than I could afford but so worth it. The concert was amazing. If you’ve ever listened to Erykah’s music, her voice comes across as soft, mellow, and scratchy in a Billie Holiday kind of way. However, seeing her live I was shocked at how strong and powerful her voice is – something that doesn’t come across on her albums. I went alone but there was a couple from Buffalo seated next to me who were super cool – I talked to them the whole night & at one point all three of us were singing along to the music. I consider this my first ‘real’ concert because it was the first one I went to where I actually knew all the words to all the songs. 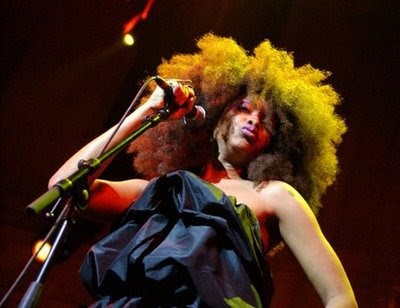 3. What is the most embarrassing concert you have ever attended? Mariah Carey in 2006! Weird confession: I’m a bit of a closet Mariah Carey fan. I’m not actually that embarrassed that I saw this concert but, I think my punk music loving date (whom shall remain nameless to protect his identity) was a bit perplexed by the whole experience. When a massive Swarovski studded “MARIAH” sign descended from the ceiling of the Rogers Center and Mariah came out on stage wearing a nightie & the longest weave known to man, he nudged me and said “I just don’t…understand this“

4. If you could have the singing voice of anyone in the world, who would it be? Definitely Jill Scott – her voice is powerful but she can also make it soft and sexy…its just beautiful. I’ve seen her in concert and her voice is even more incredible live. 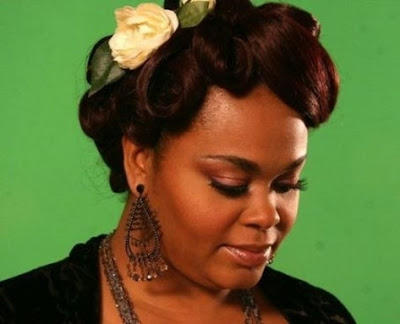 5. You’re auditioning for American Idol. What song do you sing? I made an interesting discovery recently: my singing voice in English is not so good. My singing voice in French is much better. Maybe this is the result of many years spent singing in French choir. So, if I was singing with my real voice I’d probably pick Celine Dion’s “Ziggy” because its one song I can actually sing decently from start to finish – probably because I learned it in French class thanks to my teacher who seemed to have a love boner for Ms. Dion. Plus, its a song about a girl falling in love with her gay BFF ….which seems oddly appropriate. You can file “singing Celine Dion songs in French” under the folder “Simone’s collection of weird skills”.

However, if I could sing like Jill Scott I’d probably sing “Not like Crazy” – one of my favorites.

6. If your previous weekend had its own soundtrack, what would be a few of the songs? Last weekend I spent out in the country, relaxing, eating freshly picked fruit and enjoying the last days of summer. So, I’d have to say Cut Copy’s Zonoscope album. It’s a good road-trip album and has been on heavy rotation on my iPod all summer.

7. Most annoying television show theme song ever: the Animaniacs theme – it’s like the antithesis of my “desert island” song. I live in fear that someday I’ll be forced to listen to it on repeat and it will. never. get. out. of. my. head.

8. Are you and your significant other music-compatible? We aren’t completely incompatible. He definitely is way more into rock & roll whereas I swing towards the urban & electronic end of the music spectrum. Oddly enough we meet in the middle with our shared love of Motown music.

9. A song that brings me back to middle school:

My friend’s Mom used to play this on repeat on her car stereo whenever it was her turn to carpool. This seemed just as weird then as it does now.


If this song doesn’t make you want to do the Running Man around your living room (like I just did), you might want to check your pulse.

10. A song that brings me back to high school: There are so many – I went to high school in the era of grunge, gangsta rap & girl bands like TLC. As a shout out to my West Coast roots, I’m going to go with this:


Sam Merlotte take note, Snoop and his homies were the original shape-shifters.

11. A guilty pleasure song (or three): Any of the songs I listed above! I’m still a big fan of 90’s music. Also, in my iTunes library I have this folder that I’ve titled “Mullet Dance Party”. Its full of old Guns N’ Roses and Bruce Springsteen songs that I sometimes like to rock out to when no one is looking. I have no explanation for this.

Now it’s your turn to answer one of the questions! Does anyone have any guilty pleasure music that they would like to fess up to?