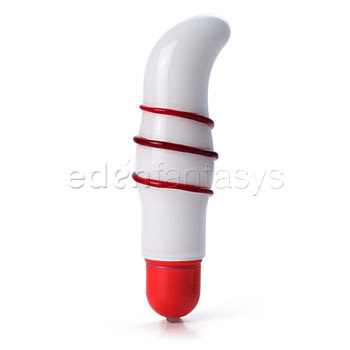 A few weeks later, the toy that looks like everyone’s favorite Christmas candy landed on my doorstep. Even though its the middle of summer, the festive packaging still got me as excited as a kid on Christmas morning. 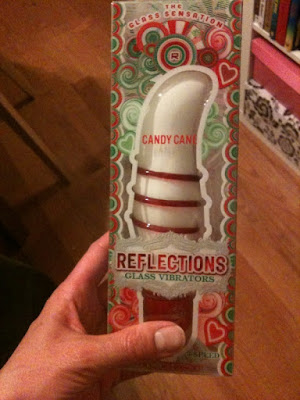 The toy is controlled by one easy to use button, has three speeds, and takes only one AA battery. As you can see from the photo, it also has some red candy-like ribbing designed to hit certain pleasure points (I’ll explain about those in a minute!)

Taking off the Wrapper:

The Candy Cane G-Spot vibrator is a very esthetically pleasing toy and I really, really wanted to like it. But, the first time I used it by myself I was a bit disappointed. The vibrations felt nice but they just weren’t strong enough to get me off. I’ve used other G-Spot vibrators before but I didn’t find that the Candy Cane did much for my G-Spot initially. The red ribbing that’s meant to increase the pleasure just felt kind of awkward and bumpy. If you are looking for a toy for solo play that has powerful vibrations and will get you off quickly, I wouldn’t recommend the Candy Cane. Instead, I would suggest something more along the lines of the True Love Honey Bunny. However, if you are super sensitive to vibrations and want something very gentle, you’d probably like what the Candy Cane has to offer.

Candy is for Sharing:

So, who WOULD enjoy this toy? COUPLES!

Woo’ed by this toy’s cute packaging, I was determined to give it a second chance. I called upon my boyfriend, who happily agreed to join in on the play session. Let’s just say- the Candy Cane vibe is much more fun with two people. I would suggest using it as a teaser during foreplay or inserting it while your partner goes down on you.

Just like you wouldn’t stuff a whole candy cane in your mouth and start to chew, this toy should be enjoyed at a leisurely pace. Don’t expect instant gratification- the more you move it around inside you, the more the pleasure actually increases. I can’t even explain exactly what the red ribbing does, except that its quite magical. After a lot of build up, I eventually just blanked out and was transported to la-la land. Sugar plum faeries were dancing and I was desperately clinging to my headboard. It was that good.

Now that I think about it, the Candy Cane G-Spot vibrator is actually a lot like Christmas. In November, the holidays still seem in the near future. Then, you notice a wreath here, a candy cane there. Whoa it’s snowing! Wait, when did the malls get so crowded?! Is that a plastic reindeer on my neighbor’s lawn? Oh god, Christmas is getting closer. Really, really close. Christmas is tomorrow! OMG, THERE ARE SO MANY PRESENTS UNDER THE TREE. PRESENTS! PRESENTS! PRESENTS EVERYWHERE! OMG, CHRISTMAS IS HERE! PRESENTS, PRESENTS EVERYWHERE! WRAPPING PAPER IS FLYING ALL OVER THE PLACE. RIBBON IS BEING PULLED. YEAH THAT’S RIGHT, RIP THAT PAPER. COME ON. RIP IT! FUCKING RIP IT! YES! YES! YES! IT’S AN IPAD! NO, ITS TIFANNY’S. ITS BOTH! ITS IPADS FOR EVERYONE! YES! YES! YES! IPAD. IPAD. IPAD. OH YES. THANK YOU! THANK YOU! THANK YOU. THANK YOU. breathe. exhale. After it’s all over there’s a huge mess to clean up but no one cares. Everyone is glowing and happy and then we all go to sleep.

-People who are very sensitive or have allergies & want something gentle
-Couples looking to spice up their bedroom activities with fun some sex toys.
-The toy user who already “has everything” and wants to try something totally different.
-Christmas enthusiasts.

What do you guys think? What are you interested in seeing my review next?