Home » Simone and the City 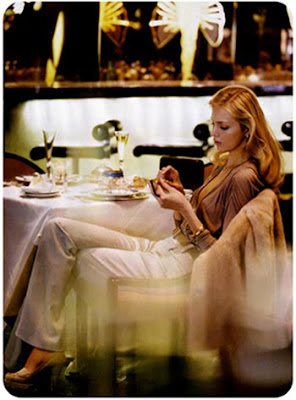 It’s raining outside and I’m still sick with a cold/flu (hence the lack of posts this past week) so in order to get back on track I thought I share with you a story from a sunny afternoon this past summer.
Like I mentioned before, while I was unemployed this summer I met some “interesting” people while hanging out in the city. One of my favorite things to do was to go to a cafe patio, order a beverage and read in the sun. As I quickly discovered,  if you’re sitting alone on a patio, on a beautiful Toronto summer’s day you might as well be wearing  a T-shirt that says “Bizarre denizens of Toronto please come talk to me”
[ FYI. If you’re looking to be left alone, DO NOT frequent the Starbucks in the Annex. It’s pick-up central. Who knew?! The first time I went there this summer I had a pimply, Beavis-like College student come up to me and nervously say “HAHAHAH You’re pretty HAHAHAHA”. He lurked in front of my table (making nervous laughter) until I politely asked him to leave me alone. However, if you’re into being hit on by socially awkward U of T students or like being approached by neighborhood creeps, then by all means this is the place for you.]
That day I was sitting outside enjoying my ice tea, reading my book (I was still working my way through “Moose: Memoirs of Fat Camp”) when a guy in his early 30’s approached and asked if he could share my table, adding “I promise I won’t bother you”. The patio was really packed and he seemed harmless, so I obliged. We ignored each other for the first 20 minutes before we began to make polite conversation.
He asked me what I did for a living. I explained that I was unemployed and in between job hunting I was working on a blog. He asked me what the blog was about. I replied,
“It’s mostly about dating, sex, relationships, life stuff, with a bit of fashion thrown in”
“Ok, so sort of like Sex and the City type stuff?”
“Kind of. I mean not really. I hate to draw comparisons to the show. It’s kind of cliche”
“I have lots of interesting dating stories. Maybe I could pitch a few to you”
“Um, Ok. Lets hear one”
“Ok, so my ex-girlfriend works in TV and she’d often house-sit for various Canadian media personalities. And sometimes I’d come over just to fool around with her in these people’s houses. One time we almost got caught when the guy came home early”
“Who was he?!”
“I wasn’t sure. Just some TV guy”
“Hmm. You’re going to have to give me names to make this story interesting. Like if you got caught mid-act by a Eugene Levy, this might actually be a pretty good story”
“Ok, how about this one: I was dating this girl who was renting a house that had a hot-tub in the backyard. I went over there one night for a party. Things got a bit wild and a bunch of us decided to get into the hot tub naked. Unfortunately the landlord came home and caught us all naked in the hot tub. He started yelling at her about bacteria & how he was going to evict her. The next morning she found an eviction notice on her door”
“She got evicted for naked hot-tubbing?!”
“No, in the end the landlord forgave her and she stayed until the end of her lease”
“I don’t know…I don’t think I could use this story either. It’s just not that good”
“What’s wrong with it?”
“There needs to be an ironic twist, or anything to make the ending interesting”
“I guess I’m not very good at this”
“That’s why I’m the blogger and you’re not”
***
That was close to three months ago. Although I cringe at SATC references, I might actually get my Carrie Bradshaw moment after all: I just got offered my very own monthly relationship/dating column on 20-something.ca. Very excited! I’ll give you guys all the details once I have them, but basically I’ll be writing more about my thoughts on relationships, dating, sex and the like. And just for the record, I will not be writing about “near evictions due to nude hot-tubbing”, however if you have been caught in the act by a Canadian celebrity please share. I’m big on Canadian kitsch, so if Brian Orser has seen you naked or you’ve had a 3-way with any of the original cast members of SCTV, then I WANT TO KNOW ABOUT IT.
(Kidding. No one needs to know about that. Please keep it to yourself)
who am I kidding. email me. we’ll talk.