Home » Shoot High. Do not Cower.

Sunday Love Bites didn’t end up happening this week because it’s Easter and my Dad is in town visiting. Papa Skinny Dip and I spent all yesterday wandering around the city & I didn’t go anywhere near a computer…it was great!

A few nights ago I was hanging out with my friends Kevin and Reggie, enjoying burgers at Marben (FYI. If you want to try one of the best burgers of your life, I suggest you try theirs. Judging by the sounds we were all making while eating, it’s Burgasmic) when the conversation inevitably turned to the topic of blogging (as it usually does when you’re hanging out with people you know from social media). I was telling the boys that in the year and half since I’ve been blogging I’m surprised I haven’t really received any negative comments. I keep on expecting some hater will come out of the woodwork just to tell me they think I’m a big whoreface but, that hasn’t happened yet. I said to the boys:

I remember laughing when I received this comment because it seemed so ridiculous. I doubt anyone who knows me in person would describe me as particularly “aggressive”. I think most people would say that I’m pretty mild-mannered. With my friends I’m talkative & bubbly. I also give good hugs. I definitely have my moments when I am outspoken and a little sassy (especially after a few drinks) but, I’m not exactly the female Chris Brown.

As soon as he said that a big smile spread across my face and I said, “THANK YOU KEVIN”.

I DO have opinions!

I’d rather have lots of opinions and not be afraid to express them & ruffle a few feathers – even if it means people misinterpret it as aggression – than to stay quiet…because, what would be the fun in that?

I just finished reading Tina Fey’s Bossypants (and I am kind of going through withdrawal) and have been thinking a lot about women & work & the creative process & writing. I found this quote on my friend Melissa‘s tumblr and I really liked it: 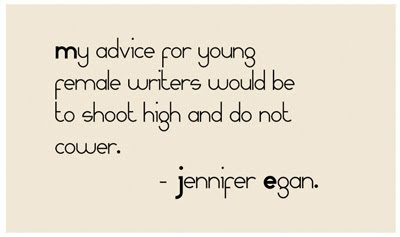 (via the Wall Street Journal moments after she won the Pulitzer. Obviously, this advice doesn’t just apply to writers)

Have Opinions. Love them. Own them. Don’t Cower.

That’s not a Love Bite but, I think its something.