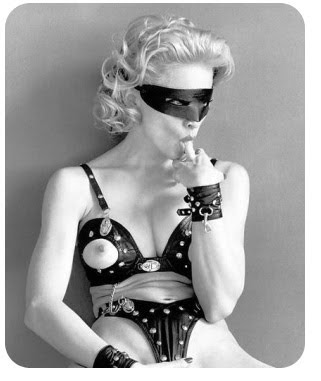 When I randomly stumbled across this photo tonight I realized that I need to add something to “my before 30 list“:
Read Madonna’s Sex book.
I know this seems like a weird thing to add, but let me give you some background information. I was a HUGE Madonna fan as a kid & early teen. Anyone who knew me back then can testify: my room was covered in posters and I had a Madonna scrap book that I think is still kicking around somewhere in my Mom’s storage room. Most importantly I had all her tapes (and then eventually CDs). I knew all the words to all the songs and used to make up dance routines (usually based on the real choreography) to an audience of zero in my pink bedroom. I was Twelve in 1992 when her book Sex came out. My Mom apprehensively allowed me to purchase her Erotica album (released at the same time), but obviously the Sex book was completely off limits.
I was always curious about this mysterious book. However, this was long before the days of the internet–the only way to see what was inside it would have been to purchase it. Purchasing it was out of the question. The book was wrapped and stored behind the desk at the bookstore, only available for purchase if you were over the age of 18. I’m sure I could have got my hands on it if I had been really resourceful. Rumor had it that a friend of a friend of a friend of a friend baby-sat for a couple who had a copy. This girl had read the book cover to cover. We decided she was a legend but also a “total PERV”. Although I was a precocious teen, I was also a good kid and I knew that this book was off limits for a reason. Plus, I didn’t want to be a “total perv” that like chick or the weird couple who owned it. Now looking back, I’m pretty sure neither party actually existed.
By the time I was actually old enough to buy the book, my interest in Madonna had waned and I had long forgotten about it.
I wasn’t until I saw that photo tonight that I was reminded that I never DID read it. But why?
It all seems kind of ridiculous now. I think it falls in the same category as skinny dipping (in the literal sense of the word). It seems like something I should have done but haven’t (despite having done much crazier things). Maybe I haven’t read the book because part of me still doesn’t feel like an adult.
So, before I turn 30 in September, I’m going to go out and find a copy of the book (preferably purchase my own copy), rip off the silver condom wrapper style packaging and read it cover to cover.
Although I’m not that into Madonna’s newer music or what’s she’s up to lately, she is still an iconic part of my growing up. Looking back, her strong, independent, no holds bared attitude towards sex has shaped the way I see my own sexuality to a certain extent. I owe it to myself to read the book.
Be an adult.
Read it. Hopefully enjoy it. Cross it off the list.
(Just don’t tell my mom)