Most people’s reaction after they discover my birth date is: “Wow that must be weird for you” .

This happens whenever I meet someone new, whenever I call my phone company, or book a flight with a travel agent or find myself in another situation where I have to give up my birthday. This even happened to me when I was going through customs after a recent trip the States. It is weird because the conversation seems impossible to escape. Sometimes people’s comments are flippant (“Whoa, 9/11 total bummer dude!”) but often people are just curious to find out what the day was like for me.

I love birthdays. I’ve always been the kind of person who loves to celebrate their birthday in a big way. This is just who I am. For the past 10 years, I’ve made a point of always doing this. Celebrating Big. Celebrating Life. I’ve had some fantastic birthday memories. But, part of me always feels a little bit guilty. No matter how amazing the day is, in the back of my mind there is always this little voice that says “something terrible happened on this day“

I actually even feel a bit guilty writing this post. Yesterday while I was relaxing at home (recovering from a really amazing night out), I browsed through my RSS reader and it really hit me how many of my favorite bloggers have been personally affected by the events of 9/11. I didn’t lose someone. I didn’t witness the events first hand. I’m just a girl who happens to be born on the same day of a very tragic event. My experiences seem trivial in comparison.

I can’t live up to some of the fantastic posts that have already been written by other people this weekend however, since people are always asking anyways – I thought I’d share with you how the day affected me.

9/11/2001, turning 21: It was my 21st birthday and the first day of my 2nd year of university. It was a beautiful sunny day and I woke up in a good mood, excited about my birthday and the celebrations that were going to be taking place that night (a bunch of friends and I had plans to go to the Bamboo – a now defunct Club/Caribbean restaurant that I used to love back in the day). Our campus should have been buzzing with first day excitement but when I got to school the streets seemed abnormally empty. That’s when I ran into my friend & neighbor Chris who was walking in the opposite direction back towards where we both lived. He said he’d heard there had been a “plane crash in New York” and all classes were canceled for the day. Not yet understanding the severity of what had happened, we walked home, slightly puzzled but still excitedly discussing the party plans for the night. When I got to my room, my phone was ringing off the hook. It was my Mom calling from the West Coast. When I picked up the phone, all she said was “Turn on the TV”

For the next 6 hours or so, I sat glued to the TV set, watching the news footage, overcome with a sense of disbelief and dread. Because of Toronto’s relative proximity to New York City, no one was really sure what was going to happen next. On the news they were talking about how Toronto, Canada’s largest city, might be the next “target”. Buildings in the Financial District were evacuated, our subway system was shut down, people were sent home from work. Friends called to cancel our plans, my room-mates left the house – all of them heading to their parents places in the suburbs. My mom was thousands of miles away, the house was empty and I felt lonely and scared.

I called my ex-boyfriend (who I was still close friends with at the time). He said:

He came to pick me up and together we drove through the deserted city streets, back to his Mom’s place in the ‘burbs.

We picked up a pizza and as we were heading to her apartment she called, excited:

“I found a McCain deep and delicious cake in the freezer…we can make you a birthday cake!“

My ex told me I could stay with them as long as I needed – until I felt comfortable returning to the city.

My ex was a crappy boyfriend when we were together but on that night he was a good friend.

A change of plans: I started off college as a Drama Major. I used to have dreams of acting on stage and being on TV. In the weeks that followed 9/11, I found it increasingly difficult to concentrate on reading plays or thinking about acting. Considering what was happening in the world, it all seemed so frivolous. I’d always been interested in social justice issues and the law. I figured that the world probably didn’t need another unemployed actor/waitress but instead would need people with the ability to understand issues and help fight for people’s rights. I switched my major to Anthropology and my minor to English and started to take classes in sociology, psychology and political science, in hopes of going to law school after I finished my undergrad. It was one of the best decisions I ever made.

I never became a lawyer (that’s a post for another day) however, the events of that fall forced me to focus and get serious about school.

9/21/2001 (Meeting a boy): Ten days later, I went out with my friends to celebrate my un-birthday. We went to our regular bar where I met a guy and had a steamy hook-up. It was a case of lust at first sight. I was never the kind of girl to go home with a guy she’d just met at a bar but, there was something in the air. The world felt different. It felt uncertain. For the first time ever, it didn’t feel safe. If it could happen in the USA, it could happen in Canada. I think a lot of us still felt scared and sad. I wanted to connect with someone. I wanted to feel something. I decided to throw caution to the wind and live in the moment.

In the cab heading back to my house, I told him that my birthday was actually a week earlier. This lead to a discussion about 9/11, world events and politics in the Middle East. I’d never had this kind of discussion with a guy (let alone in a cab at 2am). Somewhere between the club, me sharing my views on politics and arriving at my house he looks at me & says:

“You’re so fucking smart. You do realize that right?”

It was the first time a guy had ever said that to me. If it was a line, it worked.

That night began the a year & half long roller-coaster of us seeing each other. So much of us being together wasn’t a healthy but I stuck with it anyways, relying on my feelings & attraction to guide me instead of my head.

I often wonder, if the world hadn’t felt like it could end in an instant, if I hadn’t felt that need to be close to someone, would I have made the same choices? Would I have even got in the cab?

Fall of 2003, meeting my Idol: I was in my final year of university, my relationship with the guy mentioned above was behind me and life was good: I had tickets to go to a book reading of my favorite author, Douglas Coupland. That night I brought along a copy of “Hey Nostradamus” that I’d received for my birthday a few weeks before. When it was time to meet my literary idol, my knees were shaking like a tween with a backstage pass to a Jonas Brothers concert. Douglas Coupland opened up my book, saw the birthday inscription from my Dad and asked:

“When was your birthday?”
“September 11th”
“Wow, what was that like for you?”

Then I proceeded to tell Douglas Coupland, the guy whose books I read religiously throughout my teens and twenties, some of the stories I have just shared with you guys. After he signed my book, thanked me for sharing my thoughts with him and said “These are for you, to remember today” and drew a set of twin towers. 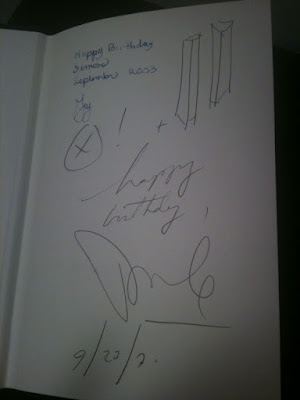 It was a surreal, inspiring moment. Law school was still on my radar but there was a new voice inside me that was saying “You need to tell stories. You need to write”

This year I didn’t have any dramatic plans, like running away to Miami Beach for the weekend like I did last year but it was still a really great time. As the clock struck midnight on the 11th, I was a packed club dancing my way into 31 with some of my favorite people next to me. We didn’t stop until 4:30 am. Yesterday was peaceful and involved more people I love, walking around town & good food.

Yesterday I realized something: I get a bit crazy about my birthdays and each year it seems to get worse. I always acknowledge what happened in 2001 but then I push it out of my mind, instead focusing on whatever BIGGER, BETTER, MORE STREAMERS, CRAZIER THAN LAST YEAR party I have planned. I always want the people I care about around me and when things don’t go as planned, when friends bail on me, I feel crushed. I realize how unrealistic (and slightly unhealthy) this. It’s just I don’t ever want to revisit that dark feeling I felt that day. I can’t imagine how people who were directly affected by 9/11 feel (and once again feel guilty for writing that previous sentence)

This year was a bit different. When I went down to the diner to pick up some breakfast, I saw the news coverage (something I never watch on my birthday). I went home, ate and while I was reading through everyone’s posts, I took some time to really think about what happened. I thought about all the people who died, how senseless there deaths were and how their loved ones must feel. I thought about how there is still a war that’s going on and that none of this makes any more sense than it did 10 years ago.

I remembered which, I think was something I really needed to do.

I know this isn’t the usual Skinny Dip post (I will get to the crazy birthday antics later this week) but these are just things that needed to be said.