Remember I mentioned that every September I go into an organizational frenzy? Last year was no exception. On Labor Day weekend, a week before my 30th birthday, I decided to clean out the contents of a storage locker and do a massive closet overhaul. I decided if there was ever a time to tackle either of these tasks it was before I headed into a new decade.

Most of the things I found during this cleaning spree fell into one of these categories:

1) Household items best described as “dorm room decor” – think fad items from Ikea circa 2002, things from my unfortunate “celestial: sun, stars and moon” decorating phase and heart shaped pillows made of hot pink fake fur (what was I thinking?)
2) Inflatable furniture (I guess this really is the same as #1. I swore I threw out my blow up couch like, 10 years ago)
3) Way too many clothes made of spandex, things that fall under the heading “club wear” and shoes too hideous to ever see the light of day again.

Opening that storage locker was like peering into a full sensory vortex of my early 20’s. Everything (and I mean everything) was saturated with the stench of the vanilla scented candles I used to burn religiously. It was like I was in my dorm room again. It was freaky.

I looked at all of the crap in there and decided:

(It’s true. Two great things about being in your 30’s: none of your furniture requires a bicycle pump and most of your clothes are made of natural fibers. Dishes that all match? I’m still working on that)

While I was tossing everything into hefty bags, I got a bit sentimental. I took some photos to remember some of the items before I sent them off to the big clothing pile in the sky. One of my favorite posts is the one where I say goodbye to my gold shoes . I also love Cristina‘s Shoe Graveyard series . I thinking that some of these items deserved a similar send-off. 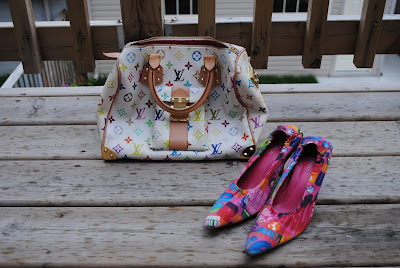 1. The pink graffiti shoes: These shoes have seen some good times and some bad times. The good times were some of the best and the bad times were some of the worst. I bought these shoes a few weeks before I graduated university. Looking at the shoes now this is hard to believe but once upon a time these shoes possessed a tiny bit of magic. I bought them at a time when I wanted to wear nothing but bright colors. “Real life” was just beginning and I wanted shoes that said “Hey, world look at me! I’m Here!” I think on some level I knew I’d need a little bit of extra color to get me through the next year ahead.

The first time I wore the shoes, a stranger chased me down a subway platform calling out “I loooovvvvve youuuur shoes.” A little bit crazy? Sure. However, it can’t be denied the blinding, seizure inducing pattern caused a stir wherever the shoes went.

When my friend Deva came to visit me in Canada she feel under the spell of the shoes and bought a pair of her own. When she returned to her native New Zealand she told me tales of strangers complimenting her footwear, sometimes even offering to trade items of their own for the pair of special shoes from Canada. She never gave up the shoes and wore them until they disintegrated.

I wore the shoes on my first date with Mr. Kite Boarder. Later he confessed (after the shoes had been tossed on the floor next to the sofa in his office – where we’d just nearly had sex) : “I hate those shoes. When I first saw you wearing them, I wasn’t sure whether I’d want to go out with you again” I should have taken this as a sign. Instead, during the 10 months we dated, I pushed the shoes – as well as so many other things that made me who I am – deep into the back of my closet (all the while, still loving them in secret).

One night shortly after we broke up, I dug the shoes out of the closet, put on my tightest pair of Rock & Republic Jeans and headed out with one of my best friends to see our favorite DJ. When we got to the club, I saw a different guy – the one I had been pining over for years. I tapped him on the shoulder, spun him around and kissed him. We stayed on the dance floor for a few hours, kissing, dancing, kissing, alienating our friends, kissing. Eventually I lured him to the back corridors of the club, where we did some very bad things. I blame the shoes.

Much like the gold shoes, the memories of the crazy pink shoes were much better than the shoes themselves. When I finally dug them out of a storage box last summer, I saw them for what they were. The toe was way too long, the proportions off, the heels breaking off. Just like the relationships they were associated with, they were way past their expiry date. It was time to let go.

2. The Purse: I bought this purse as a treat to myself when I got my “real job” after university. This bag has seen things. I took this bag everywhere. It’s been back and forth to BC more times than I can count, it’s been to countless lunches, brunches, dinners and nights of heavy drinking. It often sat proudly on top of my desk at that first job, the bright colors a reminder that “I’m here!” I even took this bag to the grocery store: 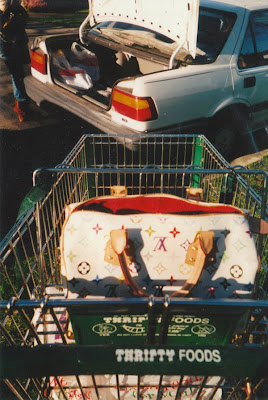 To me, this bag represents youthful confidence: it was bright and slightly garish but I always felt like a million bucks whenever I wore it.

I loved this bag so much but at some point, I just outgrew it. I stopped feeling the need to say “Hey, look at me! I’m here” Instead, I became confident in a more real way. I eventually picked out something similar, in brown. The crazy colorful bag got relegated to the back of my closet. Even though I never wore it, I still felt bad. This bag is no wallflower. I knew what I had to do. Last Christmas I took it on one final trip back to BC and dropped it off at my favorite consignment store.

My sister tried to convince me to keep it: “You could wear it with the shoes and go as Euro Trash for Halloween” but, I knew it was time to pull the plug. I hope it has found a new home with someone who loves it like I once did.

When I think of these two wacky accessories, I will always be reminded of the following lesson I learned:

In life and fashion, be bold, be colorful, take risks – even if you end up looking a little ridiculous, you’ll never regret being yourself. Don’t ever change who you are for someone else.

Although we had some good times together, both of these items will forever be associated with the beginning of my quarter life crisis. Now that I finally feel like that era of my life is over, I can’t think of a better reason to get rid of them. (Plus, in case you haven’t noticed, the shoes are kind of heinous)

Adios old friends. You’ve been good to me.

PS. It started to rain just as I was taking the photo above. If you want to imagine this playing in the background, go right ahead (I totally am)

Does anyone else have anything in their closet that they are embarrassed to admit they’ve been hanging onto for sentimental reasons?