There are some books that you read at the perfect time in your life.

This is the case with Julie Klausner‘s book “I Don’t Care about your Band: what I learned from Indie Rockers, Trust Funders, Pornographers, Felons, Faux Sensitive Hipsters and other Guys I’ve Dated“. Klausner wrote the book right before her 30th birthday as a humorous ode to the romantic collateral damage of her twenties. The book spoke to me because at the time I was also on the cusp of my 30th birthday and like Klausner, I’m also in the process of trying to make sense of everything that happened in my twenties and pull out whatever wisdom I can from the wreckage. 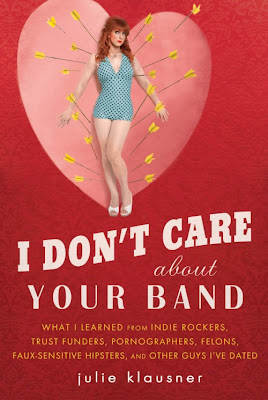 Klausner compares Kermit the Frog to the modern hipster guy (“Kermit the Frog is a terrible boyfriend”) and tells the story of dating “Douche Ziggy” a self-deprecating weirdo with a penchant for crazy sex. Although the details are slightly different, some of Klausner’s dating experiences are so close to my own that it almost feels like I could have written this book. Her stories are so witty & hilarious & achingly heartbreaking that I WISH I could say that I wrote this book. However, the chapter that resonated with me the most wasn’t really about dating at all – it was the final chapter of the book that describes Klausner’s first New Year’s Eve as a 30 year old.

I wrote quite a bit about all the stuff I wanted to do before my 30th birthday and what I did to celebrate but, I haven’t written anything about what it feels like to be on the other side of my twenties. Just like how sometimes you find the perfect book at the perfect moment, sometimes someone else is able to put into words what you haven’t been able to. This passage from the book perfectly describes how being 30 feels to me:

“I remember walking to the lip of the building to better see the skyline of sweet, wide Manhattan and thinking about how good it felt to exist in a negative space. I know what I was not……I thought about how lucky I was to be different from how I was before. How I used to mistake “yes” for “yay!” and the pursuit of knowledge for the possession of it. I thought about how trivial people used to be better company to me than solitude and how I’d finally earned the ability to shut out clutter-at least occasionally – and to leave self-sabotage to the kids who can’t enjoy being alone now and then”.

In my twenties I said “Yes” to so many things. At 20, I was a young woman (girl) on her own for the first time in a city that at the time felt enormous. Everything was a new experience. I was so eager to soak up all the shiny newness around me that I often mistook “NEW” for “WORTHWHILE”. I just kept saying YES, YES, YES, unwilling to believe that the fire I was playing with was hot until I reached my hand in and felt the burn.

Go to a party at an abandoned warehouse at 4am. YES!

Take off to Miami to party for a week with a guy you barely know. YES!

Go to a bar that smells like beer pee and stand around in uncomfortable shoes watching a band that sucks. YES!

Self-Medicate. Put lots of bad chemicals in your body. YES!

Do these things because it feels better than being alone on a Saturday night. YES!

Date someone who’s your complete opposite or totally inappropriate just for the novelty factor. YES!

Practice emotional cliff diving. Settle for half-baked relationships. Be the side-chick, the mistress, the friend with benefits. Sleep with your exes. Date guys with homes that look like the set of the latest Seth Rogan movie. Do all these things even though you know you want more. YES! YES! YES! YES! YES! YES! YES!

In the early point in my twenties I feel like I just let life happen to me. I said “yes” to so many things that at times I felt like I was Alice, tumbling down the rabbit hole towards whatever new self-created chaos awaited me.

Eventually I learned that being alone felt so much better than having to deal with the fall-out of my bad choices. Somewhere in the later half of my twenties, it became so much easier to just say “NO” to situations that didn’t make me feel good.

Being 30 is about saying “NO” to all of that stuff that just no longer makes any sense.

Being 30 is about saying “NO” to beating yourself up over all of your transgressions in your twenties. For a long time I let myself feel bad about a lot of the less than stellar choices I made when I was younger. But, life goes on. You can’t change the past. If I hadn’t done some of this crazy stuff or made mistakes I did, I probably wouldn’t have much to write about and this blog would probably be pretty boring.

Being 30 is about “owning it” – acknowledging your experiences for what they are and sharing them with others. It’s about saying “This is me…and I am OK with me”

Being 30 is also about saying “YES” to the right things. Saying “yes” to working hard at the things you are passionate about. Saying “yes” to spending time with people who you love and who inspire you to be the best version possible of you.

Whether you’re planning an all-night dance party with friends, or booking a trip to Vegas to party with 99 people you’ve never met, Being 30 is about saying YES to having fun, 100% on your own terms.

Being 30 is about being able to say without any hesitation or regret, “I’m not putting on those uncomfortable shoes and going to that bar. I’m going to stay home and write because you know what? I don’t care about your band“

I don’t know if feeling any of this stuff is exclusive to “turning thirty”. I think all of you have/will come to similar conclusions at different points in your life. For me, 30 has been the age where I have felt these emotions the strongest.

What do you guys think? Has there been a certain period of your life where you felt different that you were before? Is that time now?