I’d been avoiding unpacking my suitcase ever since I got back from Vegas.

The other night I finally decided it was time.

When I opened up my suitcase I found all kinds of cool stuff that I had forgotten about: A bag from the store in our hotel that only sold Donnie and Marie merchandise! Condom packets! Sparkles! A bazillion hooker cards!

All stuff that made me smile.

So, what does a girl do when she has tons of random Vegas souvenirs and way too much Adobe software on her hands? She makes this:

{The contents of my suitcase} 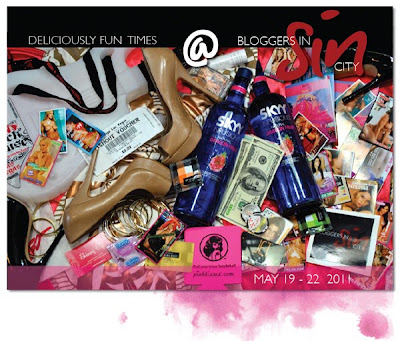 The weekend I spent at Bloggers in Sin City was my first time in Vegas and I learned a lot and I’m now ready to share my knowledge with you. No- I’m not talking about all the warm-and-fuzzy-personal-discovery-life-lesson stuff I’ve already told you about. I’m talking about the nitty gritty practical things you’ll need to know in order to survive a weekend partying in Vegas.

So, for my final BiSC related post, I’ve created a “Vegas Survival Guide” for any of you who are thinking of coming to Bloggers in Sin City next year or, maybe are just heading to Sin City for the first time in the near future.

Comfortable Heels: You will probably do a surprising amount of walking in Vegas. Comfortable shoes in general are recommended. I have lots of comfy flats for the day time however, at night I need my heels, especially if dancing is involved. Somewhere between the ages of 18 and 21, I lost the ability to dance in flats. Me dancing in flats is like me trying to dance to indie rock. It’s awkward. No one needs to see that. If you are like me and have a case of Barbie-feet-itis, I suggest packing the comfiest heels you own (Ie. NOT the shoes pictured in the photo above). Most nights I opted for a pair of black wedge sandals. They were great for walking/dancing and they still gave me some height.

Super Band-aids: Despite my best intentions, between the heat, the dancing and walking, my feet still got pretty torn up. My only saving grace were these amazing band-aids designed specifically for blister relief that Almie instructed me to buy from our hotel’s gift shop. Best band-aids ever and so essential. I think they should sponsor the conference next year!

Booze: Drinking at BiSC (or in Vegas) is not mandatory. Actually, this was something I was a bit worried about when I signed up. Would I be able to keep up with a bunch of bloggers who are still in their twenties?! But, to be honest I never actually got drunk while there. A little tipsy, yes. I think I was just having so much fun that I forgot to drink. With that said, its nice to have some booze on hand, just in case. That’s why I was really happy that Skyy Vodka gifted us each with a free bottle of Dragon-Fruit vodka. It tasted a bit funky but, it was nice to have in case we needed to um, “tune” some beverages in our rooms.

An outlandish outfit that would never be appropriate anywhere else: We had a Black, White and Gold themed night which is how I ended up buying what I like to call my “Space age Cleopatra” dress (pictured below). I don’t know if I’d ever buy a dress like this in Toronto but, in Vegas it just worked.

{Wear something sparkly. Then you can take a bad-ass photo like this} 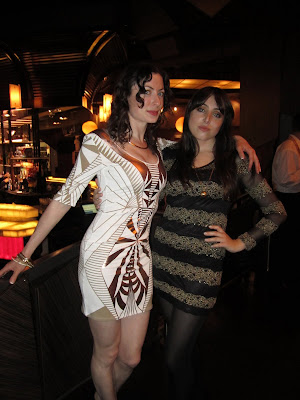 A bizarre item (s) that you can walk around with: If you’ve ever had the urge to carry your drink around in a neon pink beer cozy or drink an 88 ounce margarita out of a plastic guitar, or take photos of yourself posed on a stuffed replica of Siegfried and Roy’s tiger, this is the place to do it without shame.

Hooker cards: This isn’t a neccessity when in Vegas but, THEY ARE EVERYWHERE. They litter the sidewalk of the strip and people on the street try and stuff them into the hand of every man, woman and child. You have two choices here: you could either get annoyed that strangers are trying to hand you cards with photos of naked ladies on them OR you could do what my room-mate Carly and I did: just go with the flow and try and collect as many as possible. When you’re tired and slightly sunstroked, you can spread them out on your bed and play this game with your room-mate:

Condoms: I didn’t need these while I was in Vegas but it was really nice that Sir Richard’s Condom Company provided us with a bunch in our gift bags. Will.i.am may think that women who carry their own condoms are tacky but Skinny Dip thinks he’s an idiot who needs to be kicked in the nads. HAVE FUN BUT ALWAYS PLAY SAFE PEOPLE!

Money: I wasn’t drinking Cava Punch every night but, food and drinks in Vegas can be pricey. I’m sure you can do Vegas on the cheap however, I tried to put aside enough spending money so I could eat at normal places, have drinks when I wanted and not have to worry too much. But, make sure its AMERICAN MONEY. It’s not just that they won’t accept Canadian money, its that no one will believe you its actually real. When you try to pay with Canadian bills you will sound like this: “CAN’T YOU SEE THIS 5 DOLLAR BILL HAS HOCKEY PLAYERS ON IT? ITS TOTALLY REAL” and the gift shop owner who is selling you your magic band-aids will just stare at you blankly or laugh at you.

Hangover cures: I came armed with a makeup bag full of tylenol, Ibuprofen, antioxidant supplements, green tea and pepto bismal. I didn’t end up using 95% of the stuff but, it was nice to be able to share with others. Oh yeah, and drink lots of water. All the time. Your weekend depends on it.

Spare underwear in your carry-on: On the way back I brought an extra change of clothes in my carry on but, totally forgot to bring underwear. Then, I got stranded in Chicago overnight. Underwearless, in a skeezy airport motel in Chicago is not how you want to end your vacation. Trust me.

No Agenda: Vegas is the perfect place to get carried away in the moment! I decided before I left that my plan was to have no plan. My only “semi-plan” was to visit Barney’s which totally didn’t happen because I got distracted by hilarious bloggers, exploding fake volcanos, bronze statues of Siegfried and Roy & the like. It’s ok, I can visit Barney’s another time in a city that doesn’t have exploding fake volcanos and tigers…like, Seattle. When in Vegas you should just let the Vegas take you where The Vegas will take you.

THAT’S IT. I think I have finally got all my Vegas blog posts out of my system.

So, who’s coming with me next year?!