Home » My TIFF with #TIFF (My Take on Film Fest Madness)

(Warning: this post is about “First World Problems” of the most trivial kind)

For ten days every September the city of Toronto turns into Hollywood North, as celebrities and film industry types arrive in town for the Toronto International Film Festival – otherwise known as TIFF.

It can be an exciting time of the year. During the years I spent living and working right in the epicenter of TIFF chaos (Bay and Bloor), it wasn’t uncommon to step out for lunch and see Whoopi Goldberg browsing CDs in HMV, Dustin Hoffman wandering aimlessly around Holt Renfrew or pass Halle Berry on the sidewalk. Life in Toronto takes on a surreal quality and the population of the city seems to double over the course of a weekend. The city streets in this area become crowded with stargazers, paparazzi and hardcore Michael Moore-ish looking film nerds, who show up every year to the festival armed with festival passes, pasty complexions, overstuffed messenger bags and a defiant look in their eyes that says:

“You don’t know this but, I’m secretly wearing an adult diaper so I don’t have to take a bathroom break while I’m lining up to see the latest Gus Van Sant film” 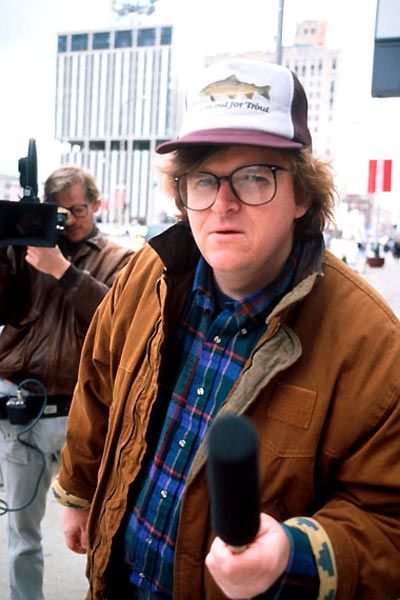 {Don’t worry ladies. These guys will not try and hit on you. They prefer their women to be made of pixels or cellulose}

Line-ups. This is a major downside of TIFF. There are line-ups to get tickets. Line-ups to see movies. Line-ups to get your morning coffee at Starbucks. The whole event just seems to get crazier every year. I love movies but I can’t deal with line-ups so I just make a point of avoiding the festival as much as possible. This has proven to be difficult.

Last year my office was located dangerously close to the Intercontinental Hotel (one of the favored hotels amongst visiting celebrities and industry people). Every day I’d have to fight my way through throngs of paparazzi and stargazers just to get to my to my usual lunch spot. Sure, I get that it’s George Clooney’s limo parked out front but..

I JUST WANT TO EAT A BURRITO. IS THAT TOO MUCH TO ASK?

A few years ago I was friends with a girl who ran with Toronto’s socialite crowd. One day we were discussing TIFF and I made the mistake of saying:

“Yeah! There are a bunch of movies I want to see this year!”

She responded by saying:

“Ew Simone. No one actually watches the movies. It’s all about the parties”

She gave me this look like I was the biggest loser on earth for not knowing this important piece of information. However, I’m starting to see her point – not that I’m a loser- but that the festival is no longer really about films. I honestly can’t tell you which films are featured this year but thanks to social media, I can tell you exactly which brands are being promoted in the various luxury gifting suites and who in my social network is invited to which party.

This is why I’ve been avoiding Twitter for the past week. As soon as I see all of this information populated all over my time-line, I start to have ugly thoughts like “So & So is invited to 8 different parties! Why am I only invited to one?! Wait, that person just got a bunch of free designer jeans and hugged a celebrity?! I WANT MORE DESIGNER JEANS”. Like I said, it’s UGLY. All the hype makes me feel horribly un-famous and un-socially connected which is RIDICULOUS. As a Toronto blogger I actually DO get a lot of cool opportunities just because I happen to live in the media center of Canada – something I am very grateful for. So, as soon as I start having these thoughts I feel like a giant asshole.

The problem with TIFF is that its unavoidable. The more I try and tune it out, the more it pops up and surprises me. Just like that week where everywhere I went I kept hearing different versions of the Police’s “Roxanne”, I feel like TIFF is haunting my life.

Trying to plan a birthday party during TIFF is a complete clusterfuck. Toronto’s most popular restaurants and nightspots are all booked for TIFF parties. If you’re able to find a location that’s off the festival circuit to hold your celebration, a lot of people won’t be able to show up because of TIFF commitments. I get it, how can my party compete with a party hosted by James Franco that features all you can drink top shelf vodka? I mean, I’D SHOW UP FOR THAT.

I thought I had all of my bases covered this year. However, 30 minutes before everyone is supposed to show up at the bar I’d chosen, my friend texts me saying “There is a TIFF party at ____. No one is going to get in”. Of course there is. I would have known this had I not been avoiding Twitter all week.

In 20 minutes, I managed to get a hold of most of the guests and re-plan the whole party (luring people to my house with the promise of 18 year old Scotch). In the end, my party turned out way better than I ever could have expected. I think the re-routing because of TIFF was actually a good thing. However, I took these photos to show you that I am not in fact crazy:

{The first thing we saw when we got to the bar on Saturday night. “See it happen here…or EVERYWHERE“} 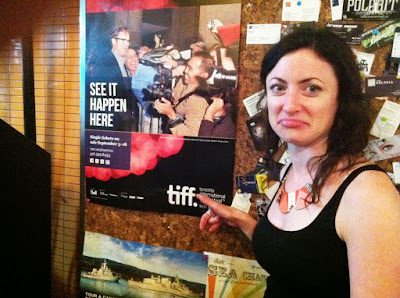 {On my birthday I was really forward to having one of my favorite restaurant‘s Parsley Pesto whitefish. When I got to the restaurant I discovered they had changed their whole menu for TIFF. The new temporary menu is based on a film called “Salmon Fishing in Yemen”} 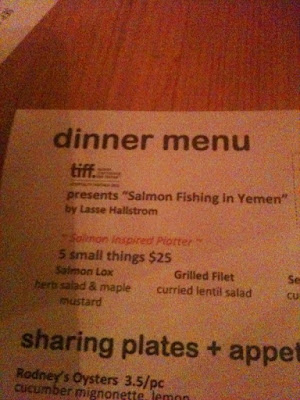 {It’s OK – They gave us free dessert because it was my birthday. Then, when we got our bill we realized it wasn’t just ice cream we’d ordered… it was TIFF ice cream} 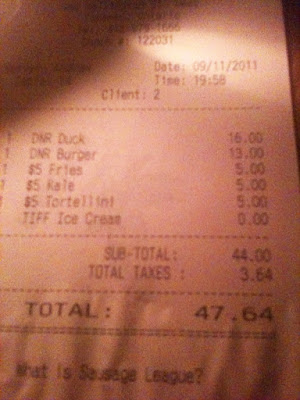 (Notice on the bottom of the bill it says “What is Sausage League?” – That’s a very good question.)

It’s madness I tell you, MADNESS!

Is it September 19th yet?