The past two weeks have been bad. Comically bad.

It started two Mondays ago when I arrived at work, reached into my bag and discovered that my lunch (avocado salad) had spilled all over my LV tote, leaving a giant stain & all of my personal items covered in green goo. Everything just went downhill from there (FYI. If you are looking for a avocado stained copy of “The Girl Who Played with Fire” – I have one)

I guess now is a good time to mention that I got a new job in April (you can file that away under “things I haven’t mentioned on the blog”). That’s right – I’m no longer working at the Anonymous Fancy Canadian Business School where I’m forced to endure things like sweaty handshakes & the booger incident. I’m now working in a Communications position for a similar organization. It’s the first job I’ve had that’s really, truly in “my field” – meaning, I get paid to write and create things. It’s been challenging and I’ve learned a lot so far. With that said, the last few weeks have been really difficult. I may look like I’m coping OK but, the math says otherwise. Observe:

Maybe this wouldn’t be such a big deal for other people but, I feel really strongly about not crying at work. Years ago I worked with a girl who was a crier. She cried when she was upset. She cried when she was happy. She cried all the time. About everything. I have no idea why. IT WAS SO CONFUSING. I’ve never wanted to be THAT GIRL. At my first job after university, it wasn’t uncommon to see a co-worker in tears after a particularly bad phone call with a client. However, that person was never me. When it came time for my performance self-review I proudly wrote under the “achievements” section “did not cry“. When my boss read it, he awkwardly patted me on the shoulder and said very seriously “We’re proud of you Simone. You’re a real go-getter“. Yes, a dry eyed go-getter. Last summer I even started reading Kelly Cutrone’s book “If You Have to Cry, Go Outside” because it sounded like something I’d be able to relate to (It wasn’t. When Kelly Cutrone – reigning power bitch of reality TV – starts to talk about self-help-y stuff like “life paths” and “destiny” I start to feel weird inside)

So, why all the crying now? Am I getting soft in my old age?

After giving it some thought, I’ve realized that the reason I’m crying now is that I actually care about what I’m doing. And, when you’re trying really, really hard but failing more than you are winning….it sucks.

When I was going through a similar rough patch at work this winter (because I was bored, frustrated & not working in my field), I consoled myself with lots of wine, chocolate and the one thing that always works: TV.

This winter while I was sitting in front of the TV, stuffing my face, quickly becoming a total wino, I noticed something: I kept re-watching episodes from the same shows. What did all these shows have in common? They all have strong female characters! I grabbed my notebook and started to make a list of my favorite fictional heroines and what I liked about them. After my list was complete I actually felt a bit better.

For the sake of sharing, here is a list of my favorite female characters from the small screen. These ladies always make me feel better when I’m having a shitty day or week or (god forbid) month: 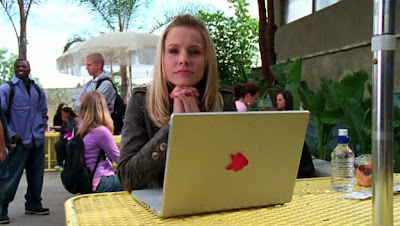 Veronica Mars is one of my favorite characters period . She’s like a digital age Nancy Drew….on steroids. Veronica doesn’t have time to obsess over like boys or make-up – she’s too busy helping her Dad with his private investigation business while trying to figure out the identity of her rapist & solving the murder of her best friend. Veronica is assertive, whip smart and has a bottomless pit of witty comeback lines. She’s sort of a Robin Hood character – she believes in justice, standing up for the people she cares about & doing the right thing even when it means going about it in the wrong (read: questionably legal) way. Despite being an outsider amongst her peers she always walks with her head held high. I wish Veronica Mars had existed when I was in high school.

Quote: “Here’s what you do: You get tough. You get even” 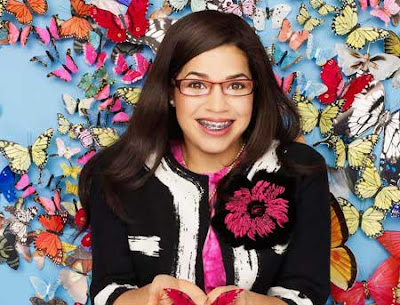 There’s so much about Betty that I can relate to (and not just because I used to have glasses, braces and my share of unfortunate hair-cuts). I can totally identify with her professional struggles as tackles the demands of a high pressure job, learns to network and deals with the feeling of being a fish out of water. I think a lot of us have probably felt like Betty at one point in our lives. What I love about Betty is that she cares deeply about what she does and the people around her. No matter what, Betty never, ever gives up. She also has some seriously fearless fashion sense (hello mixing patterns!) Although her look gets more polished near the end of the series, she never sacrifices who she is or her values for the sake of getting ahead. She gets there on her own terms by staying true to herself, being passionate and working hard for what she wants.

Quote: “Take a leap! Don’t be afraid to fall flat on your face. Believe me, I do it every day” 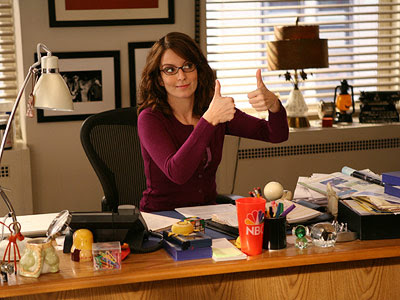 As the head writer of a comedy show, Liz is always the eye in the storm of crazy. I think many of us can relate to that feeling (being in the middle of crazy-town with no visible exit) and to Liz Lemon in general. She’s smart, she’s successful, but also imperfect. Liz Lemon makes me feel better about not always having everything together all the time. Because of Liz, whenever I do things like, say, spill yogurt right down the front of my dress right before a board meeting (true story), I can laugh it off as “Whoa! Total Liz Lemon moment!” (Instead of “whoa, I’m a disgusting human being”) Liz reminds us that its OK to be nerdy and laugh at yourself. Besides, haven’t you noticed? Comparing yourself to Liz Lemon is the new comparing yourself to Carrie Bradshaw (but so much cooler)

Quote: “You are my heroine! And by heroine I mean lady hero. I don’t want to inject you and listen to jazz”

If you grew up in Canada in the 80’s you might remember a show called Street Legal about a fictional law firm in Toronto. The first time I watched the show I was completely enamored by Olivia Novak, the hard-edged entertainment lawyer with the shellacked bob, red lipstick & extensive collection of brightly colored power suits. Olivia was ambitious, ballsy, outspoken & completely ruthless in the courtroom. She also oozed sex appeal & confidence. She was always smacking construction workers with her briefcase, grabbing dudes by their shirt collars and having steamy desk sex after hours. I wanted to BE Olivia because she was the first female character I’d seen on TV that was both incredibly smart, powerful AND sexy.

In lieu of a quote and a photo I have some cheesy YouTube action for you:


Honorable mentions go to all the female leads on The Good Wife (best. show. ever), the entire cast of the Golden Girls & Buffy (I haven’t had the chance to get to know her but I’ve heard we’d get along)

Even though I felt really crappy when I started writing this entry, reading through this list has made me realize something: I’m more like these fictional women than not. I’m weird and quirky but I’m also a fighter. I push through. I don’t give up. Things may suck right now but they will get better. They have to.

Who is your favorite female character on TV? What do you do to get over a bad day at work?