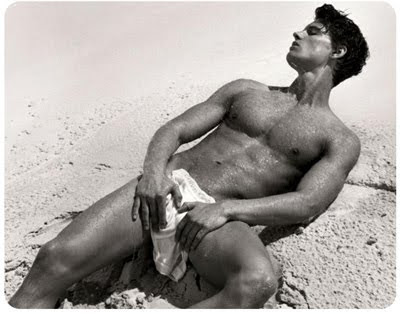 …BECAUSE THE MALE READERS ASKED FOR IT AND BECAUSE ITS TIME TO POST SOME PHOTOS OF SCANTILY CLAD MEN FOR A CHANGE.

This is a little story from early 2003, when I decided it would be a “good idea” to start sleeping with my upstairs neighbor (Just one of the many “good ideas” I had in my early twenties). It was the first night we were together and were half naked, making out on top of his bed. He’d already removed my shirt. My hands were around his hips and I was getting ready to remove his pants. I undid the fly, and eased the pants off… That’s when I saw THE UNDERWEAR. Basically the underwear consisted of one thick elastic waistband, with two small strips of fabric–one on the front and one in the back (LIKE THIS). One piece of fabric less, and you would have a jock-strap.
Apparently this style is called a “Tanga for Men“, (or more popularly referred to as a “banana hammock”). I was in shock. My mouth visably dropped open. The underwear did not fit the personality of the man– brooding, quiet, reclusive, Math major*

*The people who make bizarre undergarment choices are never the ones you’d expect.
The terrible underwear ended up working in his favor. They were so HIDEOUS that I ripped them off as quickly as possible, telling myself “I’ll just pretend I didn’t see that”. Afraid to discover what else was in this guy’s underwear arsenal, the few other times we slept together I’d either remove pants right away or we’d do it in the dark. When I broke things off with him I vowed to myself: NEVER AGAIN. Neighbors and Men’s “Tangas” were added to my list of dealbreakers.
So here it is, Skinny Dip’s Guide to Men’s Undergarments: the good, the bad and the totally unforgiveable. A male reader asked me “What DO Women want?” (underwear wise). I can’t speak for all women, I can only speak for myself. The men’s underwear I enjoy meet the following criteria:

I’m a big fan of the classic

Calvin Klein style boxer brief. Maybe its because the first guy I slept with as an “adult” (meaning, not in high school) wore these. He seemed so much older, sophisticated and sexy at the time. I loved the boxer brief then and still do. I like how they show off a guy’s body without verging on the potential scary “tighty whitey” territory that comes along with wearing briefs. However, I’ve heard from my boyfriend and a few other sources that apparently some guys don’t find them very comfortable. Some even describe them as “constricting”. If you are going to wear boxer briefs stick to neutral colors: black, gray, white etc. Please no purple. I’ve seen it. Its not pretty.

Regular boxers are cool too. In my experience guys who wear boxers are generally laid back, playful and kind of michevious (just the way I like ’em!). You can play around with colors a bit more with the classic boxer (within reason). Patterns like small plaids, thin stripes, paisley etc are totally OK.

Cartoons, illustrations of naked women, and beer logos..not so much.
*the most ridiculous pair of boxers I have ever seen belonged to a guy I dated years ago. The boxers featured a giant smiley face right over the crotch area (two eyes and a smile). When he “took it out”, the smiley face suddenly had a very large “nose”. He had this super-proud look on his face. I was laughing hysterically.This is what I call “unintentional birth control”. I was laughing so hard we never ended up doing anything.
Things that should ALWAYS be off the menu (these are pretty obvious)

–Tighty Whiteys…or Saggy Whiteys. PS. You need to watch THIS.
-Tighty Blueys (Tighty Whitey’s scary baby blue cousin)
-Anything torn, yellowed or (god forbid) stained. This should be obvious but sadly for some people it isn’t.
-Any underwear that is “less than fresh”. No one wants to go down there for a little over the shorts action only to discover the cloth protecting your junk smells like a weird mix of Gorgonzola and vinegar. We change our underwear everyday, so should you.
-Anything promoting a super-hero or action figure (I dated a guy who had GI-Joe briefs. I couldn’t decide whether this was creepy or strangely hot. I eventually settled on CREEPY)
–THIS is also creepy.
-Racing Stripes and/or Flame Motifs or anything that could be mistaken for a Speedo.
-Really crazy colors & patterns ie. Hot Pink or Animal Print
-The “Tanga” (sorry Upstairs Neighbor)
-THONGS.
-Anything that looks like THIS , THIS or THIS, (unless you’re jumping out of a cake at a Bachlorette party)
Wear any of these items and you will probably traumatize the women you date. Or you will end up being written about by someone like me.
Does anyone disagree with me? Do you have anything to add to the list? PS. Today’s photo is from a recent Calvin Klein ad campaign that apparently never made it to print. Is it just me or does it look like he’s concealing a can of shaving cream under there?