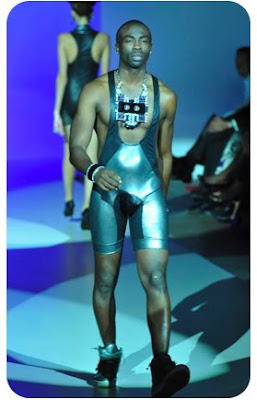 Since I only wrote about one of the shows I went to for Toronto Fashion Week, I really wanted to write a full run-down of everything I saw. So, I sat down at my laptop this morning, wrote a full entry, (complete with photos that I took at the shows) only to realize later that it was long, tedious and the multiple photos caused a lot of spacing problems. I deleted the entry. Instead of boring you guys- here is the “Skinny” version of my adventures at Toronto Fashion Week.

(For anyone who is interested I will post my complete set of photos on facebook instead)
This year I saw 4 shows:
1. Greta Constantine: Great show! You can read the review I wrote for Slice.ca here.
2. Aime Luxury: Lots of pretty, wearable clothes with an airy, beachy vibe.
3. Cheri Melaney: This show lost me. To say it was “Golden Girl-esque” would be kind.
4. Evan Biddell: An edgy show from the winner of Canada’s Project Runway, Season One.
Fashion by nature has the tendency to go over-the-top and border on the ridiculous. Being able to laugh at Fashion is what makes shows like Ugly Betty so entertaining to watch. The fashion industry has definitely produced its share of “WTF-Moments”. The Thierry Mugler Motorcyle dress anyone?! (Ok, this dress is actually kind of hot but in a weird way– but you get my point). I finally did get my “WTF-moment” at the Evan Biddell show. Obviously Biddell is talented however he’s a little too fond of spandex for my liking. I mean, men in unitards?! Really?! When the guy in the photo above strutted down the runway I kind of hiccuped while trying to disguise my laughter. And the strange digital clock bib necklace?! Evan, what were you thinking? This outfit looks like Carl Lewis and Flava Flav sat down one afternoon over a couple of beers & decided, “Lets make a Style love child together. He’ll pay homage to both hip hop and track and field. And he’ll be silver, because he’s from the future”. Honestly, I can’t imagine any man in real life wearing this, even on Church St. I think BlogTO said it best: this look should be reserved for Olympic track athletes.
Other highlights:
+The open bar @ Greta Constantine: All you can drink Martinis made with $50/ bottle premium vodka imported from
Poland. The nicest (&most dangerous) open bar I’ve seen yet. I restrained myself…barely.
+Having the chance to speak with one 1/2 of the Greta Constantine design duo!
+ Sitting in the second row, right behind Ben Mulroney. In case you were wondering, his hair doesn’t move in person
either. Like, AT ALL.
+Sitting right across from Jeanne Beker at the Evan Biddell show. Kind of cool- I grew up watching her show on TV.
+Spotting “Beach Guy” at two different shows. (Who is he?!! And why was he there?!). I didn’t have the nerve to go
up and say “Hey, remember me? You used me as Gay Deterrent” but I totally should have.
Awkward Moments:
+ Getting cornered by a fashion photographer (who looked like a bloated Gianni Versace) who spent 20 minutes
talking to me about how much he “loves young, hot girls”. To which I replied,
“That’s nice. I‘m not really into Daddy types. I’m more into corrupting the young ones”
(which caused my friend to burst out laughing).
+Having a moment of panic later in the night when I noticed the photographer was taking photos of my gorgeous,
slightly tipsy friend. Where was he hiding that camera?! CREEPY. I quickly grabbed my friend and left.
+Seeing the same guy at the three other shows I went to. I ducked behind my friend, and avoided eye contact.
Things I have learned from Fashion Week (or attending any kind of networking event):
+ Look your best but be comfortable. Don’t wear the Miu Miu purse with the wooden handle.
Yes, its a hot bag but carrying it around all night hurts. Literally. You’ll wake up the next day with bruised shoulders
like I did.
+ Bring enough business cards (I didn’t) and keep them somewhere really accessible.
+Bring hand sanitizer. You’ll shake a lot of hands. I ended up catching the flu. A true story.
+When networking follow these rules
( yes, I learned this from an episode of Ugly Betty–my new favorite show– but, its good advice):
When introducing yourself always say: your name, where you work/what you do and one memorable fact.
For example,
“My name is Simone and I’m writing a freelance article for Slice.
In my spare time I like to blog about my personal life over
at skinnydip.ca. Here is my card”
Find out the same info from the other person. Then you can assess how they may be able to help you. For his
personal “fact” Creepy Photographer revealed to me that he also enjoys hanging out with prostitutes, sleeping with
models and leather. Disturbing but memorable.
This year I went to 4 shows. Next year I want to attend the whole week.
After that: New York Fashion Week!
They say dream big right?!