A few months ago I wrote a review of J-Woww’s book “The Rules”. Not long after I published that post I was browsing around my favorite used bookstore and discovered a copy of Nicole “Snooki” Polizzi’s novel “A Shore Thing“. Let’s take a moment to digest this information – yes, Snooki wrote a book. Sitting on the shelf, it was like the book was calling out to me, whispering in a thick Jersey accent “Come closer Simone…buy me…I know you want to” As I picked up the book to examine the cover art, I could almost feel the display of Kurt Vonnegut books on the shelf behind me giving me the stink eye. I tucked it under my arm and made a beeline for the cash before too many people could see what I was doing. 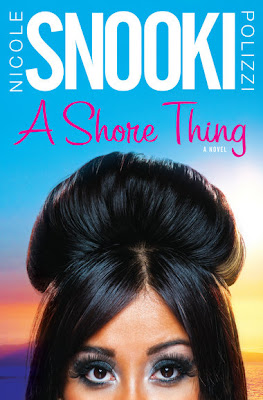 If my experience reading the Lauren Conrad “LA Candy” series has taught me anything it’s that books written by MTV Reality TV stars are like my literary can of Pringles: I know they are total crap but I can’t just have one. I must consume them all in disgusting, greedy helpings. Lucky for me, excessive guilty pleasure reading doesn’t lead to heart disease (just weird looks from people on the subway).

After I bought the book, I took a photo of it, posted it on Facebook & attached a humorous self-deprecating comment about my latest purchase. The reaction to my photo was extreme to say the least. Comments included:

“Seriously, what the hell”

By the sounds of it you’d think I’d just announced that I’d kicked a puppy and was now on my way to North Korea to become Kim Jong Il’s mistress.

My friend’s suggestion: “Just tell everyone you’re reading it for the blog”

Yes! That’s a great idea! Saying you’re blogging about something is a great way to write off all kinds of strange behavior and questionable purchases.

I had bargain basement expectations for Snooki as a novelist. The totally shocking thing about this book?

Snooki (cough cough I mean her ghostwriter) is no Virginia Woolf but, this book is decently written and it more or less follows the structure of your typical beach read or young adult book.

The story centers on cousins Gia and Bella who’ve left Brooklyn to spend the summer on the Jersey Shore. Gia is obviously meant to be Snooki and Bella is like a more subdued JWoww.

Together they get into all kinds of shenanigans while drinking jungle juice, partying and scoping out “sexy gorillas”.

On the surface this book has all the gratuitous comically disturbing moments you’d expect from the Jersey Shore brand:

Uncalled for urination: On her first night out with a new love interest, Gia (Snooki) gets stung by a jelly-fish. To relieve the pain, her date whips it out and pees all over her leg. I wonder if this is typical first date protocol on the Jersey Shore?

Explosive diarrhea: Later, in a chapter appropriately titled “Code Brown” – when a few “haters” spike her jello shots with ex-lax, a bloated, farting, Gia has to crowd surf her way through the club in order to reach the bathroom in time to dramatically “relieve herself”.

Stuff that’s just insane: Near the end of the novel there is an almost Kafkaesque scene where Snooki’s steroid addict ex – nicknamed the “The Hulk”, shows up uninvited to a party and proceeds to punch holes in the walls and smash all of the windows with his bare orange fists. To quote the prose: “The Hulk was even bigger than last time, if that’s humanly possible, as if he’d consumed nothing but steroids, protein powder and raw meat” The scene is so out there, so bizarre & surreal that I was laughing out loud while reading it.

One of the reasons I love the Jersey Shore is because so much of the show is surreal. There are so many times that I have to ask myself “Is this really happening? Am I really watching this?!” It’s like that time on the show when the Shore House toilet was plugged for 3 episodes. When the plumber finally arrived, they discovered that someone had tried to flush a Ed Hardy T-Shirt down the toilet (you can file that under “when good intentions go horribly wrong”). The whole time I was screaming at my TV: “Omg, does MTV not have access to a plumber? Aren’t they making 100K per episode?! Someone. get. them. a. plumber. WHY IS THIS HAPPENING? WHY IS EVERYONE. SCREAMING. SO. LOUD?!” It’s this kind of stuff that makes the show compulsively watchable and Snooki’s book readable.

However, under the surface I think there’s more to “A Shore Thing” than initially meets the eye. A few weekends ago, my friend Melissa came over to my place with a bottle of Champagne for some mid-Saturday afternoon backyard drinking (I love my life sometimes). As we were walking outside she saw the Snooki book sitting on my dresser & picked it up.

“I think the book has an underlying feminist narrative”

Beneath the sugary cocktails, bathroom humor and gravity defying hair, Snooki’s book actually has a positive message. *BEAR WITH ME, please*

As I’ve mentioned before, the reason I don’t like most chick lit is because the heroines always seem so apologetic and self-deprecating – they’re depicted as clumsy, neurotic, hopeless romantics who gain a sense of empowerment by buying ridiculously expensive things. I always feel like I’m reading one big Cathy cartoon except everyone is wearing Marc Jacobs. Gia and Bella refreshingly don’t fall into any of these traps.

Gia is flaky, always says the wrong thing and is dangerously accident prone but, she’s anything but apologetic. She’s confident, outspoken, stands up for what she believes in and owns the hell out of everything she does. She also has a positive body image, mentioning several times that she loves her body, loves her curves and loves to eat. Bella, on the other hand is less bark and all bite. When the sleazy guy she’s out with tries to date rape her, she beats the crap out of him- punching him in the face. Although both girls are “Snookin’ for love” neither of them have any problem kicking a guy out to the curb (literally) when they step out of line. When the two girls discover that the date rape isn’t an isolated incident but part of a hook-up game between two friends, they stage an elaborate vendetta. They seek out the two date rapists, get them to strip down naked and then Bella shoots them in the balls with a paintball gun – a scene that is totally ridiculous and also kind of amazing.

When Gia and Bella finally meet the Guidos of their dreams, and their respective beaus ask them to stay on the Jersey Shore permanently, both girls decline. Gia decides to focus on spending time with her family, stating that she’s too young to be in a serious relationship and Bella opts to go back to New York to attend NYU. When Bella’s boyfriend suggests staying and attending Rutgers instead, she replies:

“With all due respect, Rutgers is no NYU”

Whereas, Jwoww’s book was focused on how to find the right man and keep him, Snooki’s book lets us know that happiness doesn’t come from boob implants or having a boyfriend but, from being yourself and nurturing strong relationships with your friends and family. Considering this book is targeted to young adults, the message is refreshing.

So, is Snooki a feminist? Who the heck knows. Truthfully, I just chose that title to grab your attention. Maybe the question isn’t even really relevant considering it’s been widely documented that Snooki didn’t write the book on her own. She “collaborated” with established writer Valerie Frankel who helped create the novel through a series of interviews. I still like to ask the question though. I have this fantasy that Snooki’s cartoonish, deer caught in the headlights, falling down all the time act is exactly that – an act – and that she’s secretly an intellectual mastermind with the answers to all of the world’s problems cleverly concealed under her poof. She’s just fooling us until the day when she’ll pop up on our TV screens, say “Gotcha Bitches!” and enact world domination. It’s a thought. However, I’m not holding my breath.

What are you reading these days?