Do you remember how you learned about Sex?

It was the spring of 1989 and I was nine years old. I was playing at my friend’s house. Somewhere between Barbies and hide and go seek she said to me, “Wanna see something cool”. We snuck into her older brother’s bedroom where she showed me what I now realize was an educational book designed to teach kids about sex that her parents had no doubt purchased for her brother. I remember there were a lot of flesh coloured diagrams. I stared at it in awe. That was the afternoon that I made the disturbing realization:

I was disgusted and intrigued all at the same time.

A few months later the school nurse came to visit our class and give us “the talk”. She didn’t speak French so, she explained the birds and the bees in English – the forbidden language that was only used in class for really important stuff like explaining sex or why you shouldn’t do drugs or the rules of dodge-ball.

My Sex-Ed experience consists of a Kaleidoscope of bits of information/mis-information & experiences that I gathered over the years that eventually became part of the big picture of how I understand sex. Here are a few from the very early years that stick out:

Reading articles in Seventeen magazine. (I was allowed to read Seventeen magazine which talked about sex and periods but, YM was considered too racy because it mentioned stuff like blow-jobs). Listening to my friend describe the stack of Playboy magazines that her Mom’s creepy tenant kept stockpiled in his rented room – I remember her telling me: “Simone, they are something called Super Ex-Ex-Sexee“. I think she was trying to tell me that they were XXX-rated but, somehow it got lost in translation. And of course, Judy Blume books.

If you were a girl growing up in the eighties (or maybe even the 90’s) you probably remember Judy Blume. I’m sure most of us at some point picked up a copy of “Blubber“, “Then Again Maybe I won’t” or “Are you there God? It’s me, Margaret” and found a tiny piece of our own awkward tween-age self within the pages. However, probably not all of you realize that Judy Blume also wrote a few books for adults. One of these books is the 1978 novel “Wifey” – a sex filled-romp about a bored suburban housewife who decides one summer to start questioning the life that was laid out for her & instead gives in to her sexual fantasies. 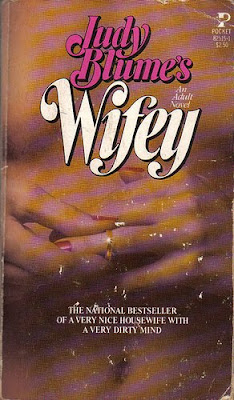 { The exact cover art. Dog ears, scratches & all. The photo was found here}
“Wifey” is the story of Sandy Pressman, a bored, sexually frustrated housewife living in suburban New Jersey. Sandy’s husband Norman is basically the word “boring” personified. Sandy and Norman have sex once a week, in the missionary position. When Sandy suggests climbing on top he says it’s “wrong” because “he’s the husband”. Norman and Sandy’s sex life reminds me of what mine might have been like if I had married Guy #3 – the guy whose response to my suggestion that we try new positions was: “SIMONE YOU’RE MAKING EVERYTHING TOO COMPLICATED”. Bullet dodged!
Sandy’s life gets interesting when she starts to receive regular visits from a naked man who masturbates on her lawn while she watches from the living room window (Yes, this really is a Judy Blume book) Sandy is disgusted but also super turned on so, she starts doing crazy stuff like masturbating in her car while she’s driving to the grocery store (Sandy has some serious skills!). Sandy starts to fantasize about her high school boyfriend Shep, who is clearly “the one who got away” and “the one who used to give her multiple orgasms“. Sandy has sex with her sister’s husband who also happens to be her gynaecologist (!) who confesses in the heat of passion that examining her “turns him on” (Whoa, creepy dude!) She also sleeps with her best-friend’s husband who takes her to see her first porno and calls her bizarre animal names like “My Little Kangaroo” while he’s inside her (Once again, I SWEAR this is a Judy Blume book). Eventually she reunites with her now married, ex-boyfriend Shep and they have lots of amazing sex until she finds out he has no plans to leave his wife.
I remember lying on my bed re-reading all the steamy passages and thinking, “WOW”. It all seemed so grown-up and shocking and HOT. Did real adults actually do this kind of stuff?
I’d almost forgotten about “Wifey” until a few months ago when I saw a copy of the book in a second hand store. When I went back to buy it the next day, it was gone. That’s when I knew I had to read it again and blog about it. Now that I’m an adult, what would I think of the book? What would I think about all the sex scenes? Would I still find it shocking? Would I cringe?
I’m happy to report that last week I re-read “Wifey” in its entirety and now am ready to share my thoughts:

I did find it shocking but, not for the same reasons I initially did.

The book is well-written & actually quite humorous, almost satirical in parts – something that was completely lost on me the first time I read it. As for the sex stuff: Although some of the scenes in the book are still pretty hot ( & no, I’m NOT referring to the ” My Little Kangaroo” scene), for the most part the stuff the characters do would probably be classified today as “vanilla”. Things like oral sex or doing it doggy-style might have seemed more scandalous to the average person at the time & place the book was set (1970’s suburbia) but, now would be considered as stuff that many of us already do as part of our bedroom routine. The scene however, where Sandy is so “excited” for her date with Shep that she decides to wear no underwear but, also a tampon – so that if she gets really turned on, she won’t “drip” on the floor of the country club, MAKES AS LITTLE SENSE AS IT DID THE FIRST TIME I READ IT (who does that?!)

What really blew me away was Sandy and Norman’s relationship. The first time I read the book I don’t think I really paid attention to Norman’s character. He’s controlling, he’s racist and he says stuff like “All you need to worry about is being my wife and making sure there is a hot meal waiting for me when I get home“. In other words, you basically want sock him in the nuts for the majority of the book. However, it was one of the final scenes in the book that really got me. [Spoiler alert] When Sandy tells Norman that she has Gonorrhoea (because she’s been getting her freak on all over New Jersey) he slaps her across the face. She’s deeply unhappy in the marriage and yet, at the end of the book she decides to stay with him.

It’s funny, I vaguely remember the book ending this way but, I was still hoping for a different ending. I wanted to see Sandy, with all her newfound sexual confidence go off into the sunset and become her own person while continuing to explore her sexuality on her own terms – just like Blume did in her own life after she left her marriage. But, it didn’t happen and it made me sad. Sandy comes so close to having a major epiphany, only to turn back at the very last minute.

Judy Blume books have followed me throughout my life. “Superfudge” helped me better understand sibling rivalry. “Are you there God? It’s me Margaret” helped me get through those awkward tween years of first periods and first crushes. “Tiger Eyes” was there for me the first time someone really close to me died. I was hoping now that I am the same age as Wifey that upon re-reading the book I would find some precious little nuggets of Judy-Blume wisdom about what its like to be a 30-year old woman. I know that the book is supposed to be a comment on life in a certain era but, I selfishly wanted to see myself reflected in the pages just like I did in the rest of her books. Instead once all the sex scenes were over, I wanted to throw the book against the wall of my apartment in frustration. I will always love you Judy Blume but, with this one you let me down.

Do you remember how you learned about sex?