Home » Has my love for the Muppets caused me to me to make Bad Dating Choices? 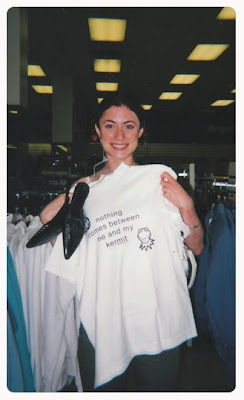 Another thing that you probably don’t know about me is that I am a big Muppets fan. Like, freakishly big. Since I was a kid I’ve probably seen “Muppets Take Manhattan” at least 55 times (did I mention I know all the songs by heart?). I still have my felt Kermit the Frog doll (a relic from my childhood) that up until a few years ago I still kept in my bedroom. Every time I see something green and fuzzy my heart kind of goes aflutter with nostalgia. I can’t help it. Over the years I’ve learned to keep my love for the Muppets under wraps because let’s face it–its NOT COOL. I’ve also learned that boys and Muppets don’t mix. If you’ve slept with me in the past ten years there was probably this moment, like when you first came over to my house where I rushed inside my apartement “to tidy up” before I lead you to my bedroom. My house is usually pretty spotless so most likely I was in the bedroom grabbing the Kermit doll (and anything else potentially embrassing) and stashing it in the closet. I learned to never leave Kermit out in plain sight after I dated this one dude who used to like to pose Kermit in indecent positions. I’d leave the room, come back and find Kermit touching himself or humping my furniture, and the dude laughing hysterically. This guy was 35. (And people always asked me why we broke up…)

{The photo on the left was taken a few years ago after my friend & I stumbled across this shirt @ an outlet mall. She wouldn’t let me buy it. Friends don’t let friends buy hideous souvenir t-shirts}

Aside from my pervy ex who liked to do indulge in some Kermit Sutra, I’ve never really made much of a connection between my love for the Muppets and my love life. That was until last weekend when BF handed me a page from the Globe & Mail and said “YOU NEED TO READ THIS SIMONE”.

The article was about Julie Klausner’s new book “I Don’t Care About Your Band: What I Learned from Indie Rockers, Trust Funders, Pornographers, Felons, Faux Sensitive Hipsters and Other Guys I’ve Dated”. Klausner, a comedian and former writer for Saturday night live says that she spent most of her twenties “taking dating cues from Miss Piggy, chasing every would-be Kermit in my vicinity with porcine voracity.” In her book she says that she sees bits of Kermit in all of the men she dated. Men “who gave in to her pushy advances but ultimately preferred hanging out with friends and pursuing their own projects, just like Kermit did on The Muppet Show“. When she watched “The Muppet Movie” as adult Klausner said that Kermit reminded her of the “vintage-eyeglass-frame-wearing guys … who pedal along avenues in between band practice and drinks with friends, sans attachment, oblivious to the impending hazards of reality and adulthood”All of this sounds strangely…familiar.

In my twenties, did I date “Kermits”?

In my early twenties I was starstruck. I deliberately went after guys who had this “star quality”: beautiful boys with big personalities who loved being the center of attention (this explains why I dated a lot [wannabe] struggling actors, musicians and models]. I thought I was fabulous and therefore deserved to be with someone equally as fabulous & glamorous. However, I eventually realized that there was only room for one under the spotlight.

Most of these guys were more interested in playing their guitars, hanging out with their friends, snowboarding or having movie marathons with their gay neighbour (don’t ask) than they were in dating me. But did that stop me? NO!
Their apparent “resistance” just made me try harder. In true Miss Piggy style I THREW myself at these guys. You might even say I was “aggressive”. I seduced guys in their dorm rooms. I pushed boys into the Men’s room at Element Bar for impromptu make out sesssions. I lured a guy I was attracted away from the party we were attending, to a dark corner just to show him what kind of underwear I was wearing. For all my efforts & aggressive hook-up strategies none of these entaglements ever really ammounted to much. Often the guys went running in the opposite direction.

My favorite example of a “Kermit guy” is this guy I dated in 3rd year university. He was tall, thin, & attractive in an emo-boy Topher Grace kind of way. He was an “aspiring poet”. He always seemed kind of pre-occupied which I mistook as a sign that he was in deep intellectual thought –really I think he was just distracted and probably not that into me. We’d been dating for about 3 months. I really wanted him to like me as much as I liked him. For his birthday I decided to cook him an amazing birthday dinner. I made all of my favorite Eastern European home cooking dishes: stuffed Hungarian peppers, perogies, fried Kolbassa, Latkas, saurkraut. I bought a new dress & new scandalous lingerie. I thought surely that all of this would impress him and he’d see just how awesome I really was.

What happened when he came over was pretty much the opposite: He picked at his food, staring distractedly at the TV. When I saw that dinner wasn’t going to happen, I stradled him and initiated a make-out session. Mid-makeout session I asked him coyly if he wanted to see a private show of my new lingerie purchases. His response was “You shouldn’t squander all of your money on such silly stuff Simone”. He pushed me off. Before I could muster up a reply his phone rang. A few seconds later he said:

“Zack has tickets to the new Star Wars. He’s been waiting in line for 13 hours. Gotta go”

A few minutes later he was out the door. I was left feeling like an idiot in a brand new dress, some pretty fucking hot lingerie and enough food to feed a former Soviet Union Satellite country.*

Ok, so this guy was a bit of a doofus. But overall, the guys I dated during this period aren’t to be blamed here. At the time I was all about MOI MOI MOI. I wanted so desperately to love and be loved that I ignored a lot of the signals these guys were giving me. Instead, I projected all my crazy hopes and expectations for the relationship on to them. If I had only listened to what they were really telling me and paid attention to their actions, I might have seen that they just didn’t like me enough.

Knowing what I know now, I think Miss Piggy had it all wrong. I think if she (like me) had taken a step back she would have seen she was just pursuing the wrong kind of dude. She’s a strong woman (hello karate chops!) with killer fashion sense (she rocks purple satin gloves like nobody’s business!). That’s a whole lotta woman for any guy to handle, let alone a frog. I can’t help but wonder, if she had held out longer she might have found someone who could handle all of her fabulosity (Rolf? The Swedish Chef maybe?). I DID. He’s more of a Fozzy Bear type: loveable, loyal to a fault and tells lots of corny jokes (and some good dirty ones. I like those best). And even when I’m at my most Miss Piggiest: demanding, dramatic, over the top, he loves me just as is. That’s all anyone can ask for right? WOCKA WOCKA.

Does any of this sound familiar?