*This post was originally published nine years ago (!!!), however with Halloween just around the corner I thought it would be fun to bring it back from the archives! (Also, I’m still kind of proud of myself that I managed to pull this off & wear it in public.) I’ve updated the cover photo to show I I re-wore the costume a few years ago.

Here are a few things that make me happy: dancing, writing & making art projects. Its been a long time since I’ve made anything & even longer since I’ve really dressed up for Halloween (last year’s black American Apparel body con dress, fish-net tights, bun & red lipstick combo that I tried to pass off as “I’m a Robert Palmer back-up dancer” doesn’t count).

Then, late last week I was bit by the crafting bug after reading about some of the scary festivals from around the world in a recent article published by Betway.

I was lying in bed watching Katy Perry’s “California Girls” video (again) and drooling over how adorable Katy looks partying in candy land, when I had a brain wave: “I WANT A CUPCAKE BRA! I NEED TO MAKE THAT! I’M GOING TO DO IT FOR HALLOWEEN!”. So, that’s what I did and I have the photos to prove it.

INTRODUCING: How to live your own “Teenage Dream” a step by step tutorial.

1. My biggest challenge was figuring out how to make the cupcake boobs. I don’t even bake, so I knew this was going to be interesting. On Friday afternoon, I bought some modelling clay, plastic bowls and sprinkles. 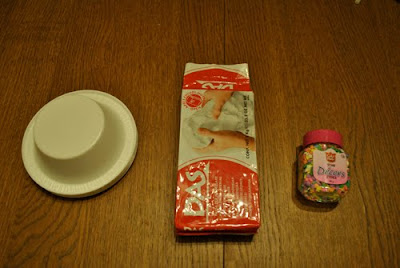 2. I shaped the wet clay around the bowls and then let them sit to dry. On Saturday morning I woke up early and ran into the kitchen to check on the boobs. Bad news! The boobs still weren’t dry and the parts that were dry were brittle and cracking. They also weighed about 5 lbs each. If I strapped these babies onto my chest I would surely topple over. 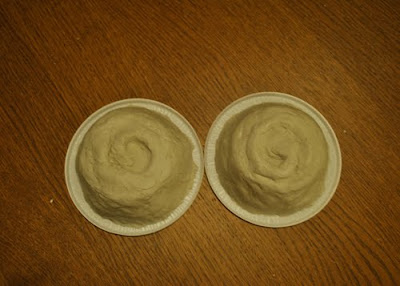 I decided this wasn’t going to work. After stomping around the apartment a bit, I gave myself a pep talk: “Simone, you’re handy! Remember when you learned how to do all that cool stuff around the house so that you’d stop sleeping with your male friends who were always offering to help you put together your Ikea furniture? YOU CAN DO THIS!”
3. I ran to my tool box and pulled out a jar of Polyfilla. I grabbed two new bowls & covered them in white goop. The best part about Polyfilla is that it  has the same texture and consistency as icing. It’s also super lightweight. 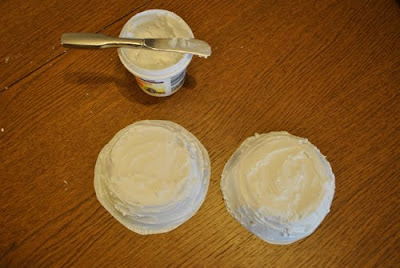 While I waited for the “icing” to dry I took a trip down to the Gaybourhood to buy myself a blue wig and some eyelash glue.

4. When I came home, the Poly Filla had hardened nicely which meant…SPRINKLE TIME! I used crazy-glue to attach each sprinkle individually. This was a tedious process but I couldn’t really figure out a better way to attach them without damaging the icing. 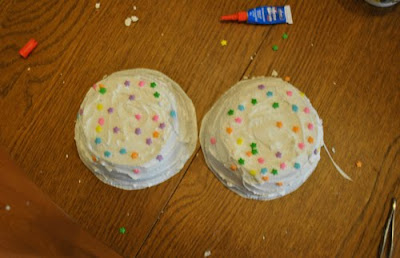 5. With the sprinkles done, it was time to glue on the “cherries”. On the way home from the wig store, I stopped by Sugar Mountain , a local specialty candy store. I grabbed a bunch of different berry candies that I thought might work & a few extra for the road (I love gummy candy). 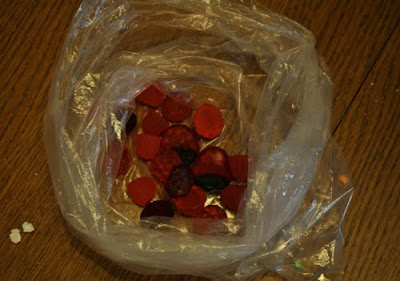 6. I ended up going with the raspberry organic juice berries. They were softer and less pointy than the Swedish Berries. I crazy glued them on…and voila! CANDY NIPPLES! 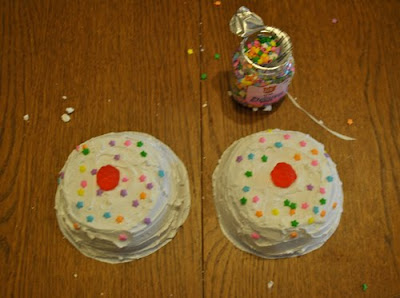 7. The trickiest part of this whole process was figuring out how to attach the cupcakes onto the bra. Originally I was just going to crazy glue them on but then I realized I didn’t want to wreck a perfectly good bra. Instead, I crazy glued some strips of blue ribbon onto the back of the plates and sewed the edges onto the bra. There has to be a better way to do this. I just didn’t figure it out in time. 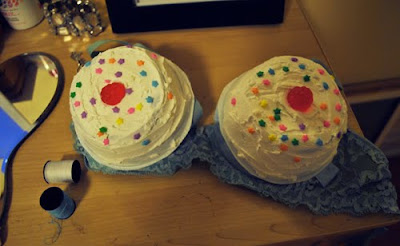 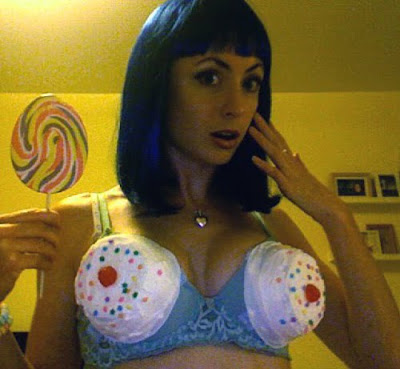 The rest of the costume consisted of a pair of denim daisy dukes cut from an old pair of skinny Levis (I was originally going to spray them with glue glitter but decided not to just in case I wanted to wear them again – don’t judge!) , candy jewellery and a pair of pink glittery high heels (a drag queen somewhere is jealous.)

FYI. Adding on this much extra boob is…an experience. If you forget you’re wearing them and turn suddenly, there is a good chance you’ll knock someone’s drink out of their hand (true story) and forget about trying to hug your friends! Overall the costume held up well and the only major set-back was when I realized I’d lost one of my candy nipples mid-through the night.

This wasn’t the easiest costume and it wasn’t the cheapest (at $34.95, the wig was the biggest investment) but I had so much fun making and wearing it that I didn’t want to take it off at the end of the night.

When the DJ played “California Girls” I jumped up on one of the dancing platforms, grabbed my boobs and sprayed the crowd with whipped cream.

I’m totally kidding. I haven’t figured out how to do that yet. Maybe next year.

What are you dressing up as this Halloween?