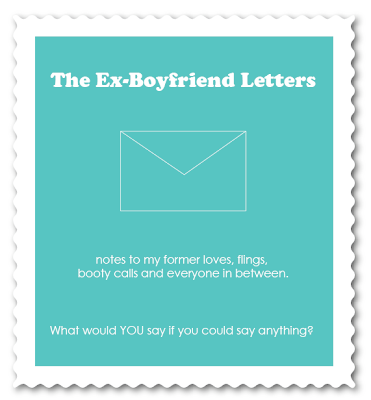 Dear ________ ,
Originally I wasn’t going to write you a letter because our break-up was pretty cut and dry. You were too old for me. We were both at different points in our lives. When we broke up, we shook hands as friends and never spoke again. But here is what I should have said to you when I had the chance:
YOUR FRIENDS TOTALLY SUCK.
They’re pretentious. They’re elitist. They are total ASS-HATS.
Hanging out with them while we were dating was honestly one of the most painful experiences of my life. Don’t believe me? Let me refresh your memory. Here are a few things that happened while we were dating that convinced me your friends were douche-bags:
1. The Ikea incident: While we were dating I had to move apartments. Your best friend kindly volunteered to help me move. While you guys were moving you managed to break the legs off of my Ikea computer desk. When this happened, you and your friend started laughing.

Me: “You guys just broke my desk”
Your friend: “It was a crappy desk anyways. I think I just did you a favor. What is this.. Ikea?”
Me: “Yeah thanks. Now my desk has no legs”
Your friend: “You should really spend the money and buy better stuff Simone. Ikea is for

I really wanted to yell at your friend and say:

I just graduated university and have 30K worth of debt. I AM LOW INCOME. And you just amputated my desk. ASSHOLE.

But I didn’t. I swallowed my feelings while you stood by idly, laughing with your friend as he made fun of my stuff. I should have broken up with you then.

2. The Wife: Your best friend’s wife is a total SHE-DOUCHE. I just had to put it out there. She’s one of the most controlling, competitive people I have ever met. I tried to be friends with her but it stopped being fun when I realized she tried to control every. single. social. situation. The worst was when we’d hang out with both of them and she’d pick these crazy fights with your best friend. They’d be swapping passive aggressive comments across the dinner table while we were held hostage, listening to this crap. It was seriously stuff right off of the pages of “Who’s Afraid Of Virginia Wolf”. If I wanted to watch that, I’d rent the DVD. At least then I’d be allowed popcorn. The worst fight was definitely the one that took place at the Mexican restaurant. Between your friends embarrassing comments about how much they loved “ethnic food” and their public display of relationship problems, the staff was totally staring at our table. I just wanted to grab one of the oversize sombreros off of the wall so I could hide under it until this whole mess was over.

I know you found these fights totally awkward and inappropriate.

But you never did or said anything.

The day I completely wrote your friend’s wife off as a SHE-DOUCHE was the night I showed up at your birthday toting my vintage Louis Vuitton bag. I had recently got my first “real job” and just felt like dressing up that night. As soon as she noticed

the bag she was suddenly nicer to me than she had ever been. She pulled me aside and said condescendingly “Oh, Simone. Isn’t it nice to finally be able to buy nice things for yourself?“. Then, she held up her $700 pocket book and said “Welcome to the Club!“.

What I really should have said to her was this: The purse is three years old. I bought it with my own money (vintage). And despite being a CHARITY CASE in your eyes, I DO have nice things. I just don’t wear my

nice things around you because frankly, you’re not worth it. And unlike you, I don’t need to rub these things in other people’s faces because my whole sense of worth isn’t built around what kind of monogram is on my purse. I actually feel really bad for you that this is how you see yourself and the world. Whatever “Club” you think you belong to, I’m not interested in joining.
3. The Hitler incident: This is what convinced me once and for all that your best friend was an asshole. We were driving through a “low income” area of Toronto that is known for its high density housing projects and large immigrant population. Your friend says,
“This neighborhood is disgusting. It doesn’t even deserve to exist”
Me: “I have friends who grew up around here”
Him: “Well, its disgusting. The city should just bulldoze the whole area”
Me: “Umm, I don’t think the residents would be too happy about that”
Him: “I would just round everyone up, put them on buses and ship them off to farms in the country. Maybe they’d learn how to become productive members of society”
Me: “Oh you mean sort of like how Hitler rounded up the Jews and sent them off somewhere?”

Your friend stared DAGGERS into my eyes. I’m pretty sure at that moment he hated me. And I hated him. That was also the moment I lost respect for you for not standing up against your friend’s obviously fucked up values.

You became an asshole by association.

4. The Trapeze: You and your best friend were really into Kite Surfing. My new boyfriend says that this “sport” is retarded and for pussies. I have to agree with him here. Because of your obsession with Kite surfing I will never, EVER date another guy who plays a sport that can have the prefix “XTREME” placed in front of it. I hated Kite Surfing because it totally monopolized our time together. One Friday night we went over to your friend’s house because he had set up a Trapeze swing in his loft that apparently simulated the “aerial movement” (?) of being on an actual board. I sat on the sofa, watching two 35 year old guys swing from one end of your friend’s loft to the other, like overgrown monkeys. Eventually I got so bored that I fell asleep sitting up. When I woke up, I looked at my phone and saw that 3 hours had passed. I don’t think you had even noticed that I was unconscious. I realized at this point that there wasn’t room for me in this bro-mance.
I never understood why you liked hanging out with these people so much. I always thought you were “different”. I thought you were better than all this. But, it can’t be denied that the people you choose to surround yourself with ARE a reflection on who you are and your values. You CHOSE to be these people’s friends. Looking back on you and me, I can now see how much of your friends values were your own.
I don’t think you really liked me for who I was. Not really.
There were many, many times where you criticized the way I dressed and the things I liked. You called them “tacky”. You thought I was too bright. Too glittery. My personality too brash. My hair too curly. My earrings too big. Around you, I toned down so much of myself just so that you and your friends wouldn’t feel uncomfortable. I straightened my hair. I listened to my Roots CD in private (because you thought my music taste sucked.) I tried to become the white-washed-WASP-y-white-cotton-pantie-wearing-GAP-commercial-girl that you wanted. But it didn’t work. Because that’s not who I am. I will never be white cotton panties. I will always be leather and lace and garters and bright colors. And as much as YOU hated it I love animal print (in moderation.) I have Eastern European roots-wearing animal print is like my fucking birth-right.Deal with it. I love music with bass and dancing around the living room to Craig Mack with the volume cranked. Your comments hurt my feelings because when I met you, I was happy with who I was ( I still am). It was you who didn’t like who I was.

Honestly, I think you only stayed with me because you thought I was hot and liked fucking me. When I stopped wanting to fuck you, I think we both just decided to cut our losses.

But that’s OK. Water under the bridge. In the end we both wanted people that neither of us were. You wanted a girl that would stroke your ego. I wanted a guy who stood up for what he believed in. Neither of us got what we wanted from each other.

And I hated your friends.

That pretty much sums it up.

What would you say to an ex if you could say anything?