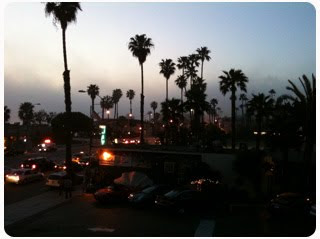 FYI. Lack of blog posts this week are due to a serious case of Californiaillness.

Yes, you heard right. I said California-illness. Not Californication.

Although I brought back lots of good stuff from Cali (good memories & amazing photos, a taste for fish tacos, lots of cool fashion finds, a DVF shirt that I got a ridiculously good deal on..) I also brought back a nasty American cold as a souvenir. I feel like my American Cold is still upset about the Canadian Olympic Hockey win and now its taking revenge on my body (!). That’s the only thing that can explain the wrath of this cold. The past two days since I’ve been back I’ve just been trying to get through work & the things I need to do without going into massive, asthmatic coughing attacks.That’s some sexy imagery for you. I have Thursdays-Mondays off from work so I never really got around to telling my boss that I was going to California for the weekend. Yesterday she said to me “Oh you poor thing. You probably picked up the cold on the TTC“. I didn’t want to get into it so I just smiled meakly and said “Yeah, that must be it” (It has absolutely nothing to do with the fact that I flew on a red eye flight, walked all over LA, shopped, ate, drank, lived the dolce vita, inhaled way too much smog, and flew back on another red-eye 5 days later. Two red-eyes in less than a week-I’d be surprised if I WASN’T sick)

Was it all worth it though? OH YES! I had a really amazing five days in California. My friend Ukelele Misfit has a theory that you’re either a New York person or an LA person. I haven’t 100 % made up my mind about which one I am but I’d say I’m leaning more towards LA. I stayed mostly in the Santa Monica/Venice Beach area so that could have something to do with it. I loved the laid back vibe. I loved being by the Ocean. It felt like home. So, maybe its safer to say that I just am a west coast person at heart.

(To be honest, my perfect city would combine elements of both places. I totally hated LA traffic & the city’s “car culture”. Ideally, I would combine the accessibility and cultural aspects of NYC with the coastal, laid back setting of Califiornia. I guess if you did that you’d get….San Francisco?!)

Anyways, I just wanted to let you know that I am ALIVE. Once I feel better, Skinny Dip will be back to its regular blogging schedule (hopefully over the next few days).

PS. I took the photo above with Molly. That was the view from our hotel Balcony, at dusk, right before we headed out for the night to meet friends for dinner & drinks. I love the ubiquitous LA palm trees!

What do you guys think? LA vs NYC?