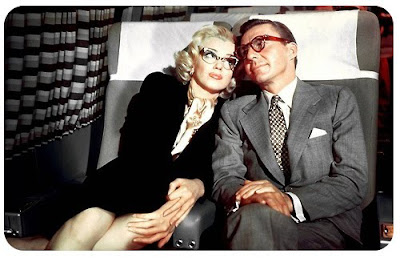 I’m not really sure why I agreed to go out with “H” in the first place.
H and I worked in the same building. When I met him I was just starting to get over “Dave the Rollerblader” (an over-tanned Juice Pig who broke my heart—which all seems laughable now because I can’t really remember why I even liked him in the first place). I figured it was time to “get back on the horse” so to speak. So, when H. came up to me one day and said “I just got some free movie passes. Would you like to go with me tomorrow night?”, I said to myself the 6 words that everyone always lives to regret:

I met H. after work the next day.
The first thing I noticed was his date attire. He had on giant, ass-sagging jeans and a massive hoodie that he’d pulled over his head and tightened so that his face was mostly obscured. HUH? When I met him he was wearing a suit. Was this even the same guy?! I had come straight from work so I was wearing a black short skirt, a matching cropped blazer and high heels (Fashion wise I like to call this my “Ally McBeal phase”). All I could think was:
This isn’t going to go well.
I was starving, so I suggested we go to this little Vietnamese restaurant right next to the movie theatre for some quick eats. Once we were seated I looked at him from behind my menu and asked him what he was going to order. He sipped on his water and replied,
“Uh, I’m not going to get anything. I’m kind of broke right now so I ate before I came”
(WHAT?)
“So, you’re just going to watch me eat?”
“Uh, yes I guess so”
“Do you want a coffee or something?”
“Is it going to cost more than two bucks?”
I ended up ordering the coffee for him anyways, because I figured it would give him something to do other than stare at me while I ate. But that’s exactly what happened anyways: he watched me, nursing his $2 coffee while I chowed down on a giant plate of coconut noodles & BBQ pork. We pretty much had nothing to say to each other. However to ease the tension he decided that now was the time to share one of his “freestyle raps/poetry pieces” that he had been working on. Because performing BAD freestyle raps, while eating at a quiet Vietnamese restaurant is surely going to make things LESS AWKWARD. Right. The restaurant staff were staring. I was cringing. I was suddenly overcome with the urge to slide under the table. To get out of there as quick as possible, I grabbed the bill.
I guess that $2 was burning a hole in his pocket because when we got to the movie theatre he says to me “Do you want some snacks?”
Of course I wanted snacks! If I was going to survive the rest of this date I was going to need some kind of corn syrup sweetened snack or beverage STAT. However I was kind of skeptical, can you actually buy anything at a movie theatre concession stand for less than $2?!

When he came back from the snack bar, he had ONE small popcorn and ONE small drink with ONE straw. He says to me,
“I thought we could share”
After his dinnertime rap performance I KNEW there wasn’t going to be a goodnight kiss– the last thing I wanted to do was swap mouth cooties with this dude over a communal straw. I politely told him not to worry about it and went and bought a second drink for myself.
I did get kind of hungry during the movie, but every time I looked over at the popcorn, I saw the edge of his grubby hoodie and his long tarantula-like bony fingers digging into the bag, stuffing big handfuls of popcorn into his mouth. Instead of taking the risk of accidentally touching hands, I decided to try and concentrate on the movie.
The movie we went to see was called “Very Bad Things”.  Are you feeling the symbolism?! I am.
As we excited the movie theatre, H ran excitedly towards a man standing in the lobby: “OMG, A GUY GIVING A FREE BALLOONS! COOL! DO YOU WANT A FREE BALLOON?!”
(Well, they’re free aren’t they?!)
So, with my balloon that said “Very Bad Things” floating above us, he said:
“We should totally do this again sometime”
When I started to visualize what a second date with him would entail (Money Mart? a trip to the impound lot? Dog fighting? Bail money?) I blurted out:
“NO! I DON’T THINK WE SHOULD!”

That was how my date with H. ended.
Things we can learn from this date:
1) Guys, don’t ask a girl out on a date if you can’t afford to actually go on a date. I’m all about being wined and dined. However, if you’re broke, at least try and hide it from the girl. Don’t let the words “I’m broke” be the first thing you tell her about yourself. Get creative: go for a walk in the park, or the beach, or for dessert. Some of the best dates I’ve had cost little to no money.
2) Performing freestyle raps (for non-ironic reasons), especially if you’re not good at rapping is never a good idea. Sure, this kind of thing may work for guys like Jay-Z. However, Jay-Z can also afford to buy his own coffee. You’re not Jay-Z. You never will be. Just don’t do it.
Some of you may think I am being a bit hard on this guy, but here is the epilogue to the story:
About a year later, H. came into my place of work. When my teenage coworker saw him she whispered to me: “That’s the guy who broke my friend’s heart!”. As it turns H (who was in his early 20’s at the time) liked to invite High School girls to parties, get them drunk, de-virginize them and then dump them a few days later. He’d apparently done this with my coworker’s friend and several other girls at her school. I imagine me actually being legal age must have been an exception to his normal dating routine.
His behavior  must have eventually caught up with him because 3 years later I saw him in the grocery store with a much younger looking girl and 4 small children who looked just like him. I managed to duck behind a display of soup before he was able to see me.
Not that things EVER would have progressed beyond that first date but, I’ll still consider this a MAJOR BULLET DODGED.
What’s the worst first date you’ve been on?