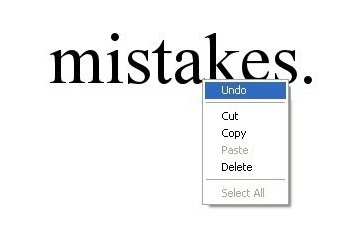 Online dating has never been my thing. I like to see what I’m getting up-front. You know, kick the tires a bit. I don’t even like buying shoes online and as Cher from the movie Clueless says, “Those only go on my feet”. I’m old fashioned. I figure if I’m meant to be with someone, our paths will cross. No divine internet intervention required. I did however try online dating ONCE.

So, without further ado, here is the story of my FIRST and LAST online dating experience:

I met _________ about 7 years ago through a once popular social networking site which I am embarrassed to admit I used to belong to. We started chatting after he sent me an initial email saying that he liked my profile photo. He was 27. Spanish speaking. Dark-Hair, brown eyes. I’ve always liked the Latin guys and they’ve always liked me. He looked like a bit like a South-American Michael Buble. I thought he was cute. I said to myself the words that all optimistic daters say to themselves and live to regret at some point:

“He’s cute and he seems normal“

I should have known things weren’t going to go well when he sent me the baby photo.

It was a photo of himself as a baby, sitting on the floor in a diaper, drinking out of a beer bottle. Attached was the caption:

(* = hahahah. I always got the impression he was speaking to other people in Spanish whenever he’d send me messages)

[Before I go any further: what is up with guys and baby pictures? 4 out of 5 of the Spanish guys I’ve been involved with have ALL given me photos of themselves as babies. This includes my High School boyfriend who gave me a photo of himself as a toddler and begged me to pin it up in my locker. I grudgingly obliged, only to have my English teacher walk by one day, see it and say “I didn’t realize you had a baby. He’s so adorable“. This was followed by quite possibly one of the most awkward teacher-student interactions ever where I explained “That’s not my kid…that’s my boyfriend“. I wish I could make this stuff up. I’ve often wondered, are giving out baby photos a “Thing” or have I just been dating weird guys? Wait. Don’t answer that. ]

About a week later, we went out for dinner at a cute, candle-lit restaurant in Little Italy. When I saw him in person, he looked ALOT older than in his photos on the website. But, he was still quite handsome. Over a bottle of wine and some pasta we got to know each other.

He started telling me this gripping story about everything he went through when his family moved from _________ (insert South American country here) to the States. He told me about how they were really poor and settled in an area that was really rough. He explained that because his parents were always working to support them, he eventually succumbed to the local gang culture. As he told me this story he looked pained and like he was about to cry.

I looked into his eyes, from across the checkered table-cloth and said “Wow, that must have been really difficult for you”
Him: “It was, I even stabbed a guy once and ended up spending some time in Juvie”
Me: WHAT?!
Him: HAHAHA JUST KIDDING. HAHAHAH
Me: Wait, kidding about the Gang or the Stabbing or both? (Please say both)
Him: About EVERYTHING. I can’t believe you believed me! HAHAHAHAHA

And so went the rest of the night:

Him: “I auditioned to be one of the members of Menudo. But they rejected me”
Me: Really?!
Him: HAHAHA JUST KIDDING HAHAHA.

I have no idea whether anything he told me that night was true.

The whole time I remember thinking THIS IS WEIRD. But he’s cute, and there is wine. And…

A few days later, he came over to my apartment for dinner. After our meal, we were sitting on my couch, making out. I was sitting in his lap, kissing him, rubbing my hands through his hair, when all of a sudden I feel his hands probing around under my rib cage…

(As a disclaimer, I am very ticklish. I’ve laughed hysterically through many pedicures)

Before I knew it, his hands were all over me. Tickling me. And wait, was he making baby noises?!

So, he kissed me again. His lips travelled down my neck, to my chest…down towards my stomach. Oh YESSSS. Now we’re talking. Then he pulls up my shirt. He leans in to kiss my bellybutton. But instead of kissing it, he starts blowing air into it which results in a FARTING NOISE. He’s motor-boating my stomach. Rubbing his face on my belly, making more OOOGA BOOGA GAGAGA GOOO GOOO BABY LIKES IT GOOO GOOOO noises.

I pushed him off me. Looked at my saliva covered stomach and said,

“It’s late, I think you should leave”

A few days later I received a call from him:

That’s when it hit me: This guy didn’t just want to talk like a baby. THIS GUY WAS A BABY.

About a week after the phone call (after I had written him off and kind of hoped I’d never hear from him again) I received this long detailed email that said:

“I just wanted to let you know that I found out my ex-girlfriend is pregnant with my BABY. We broke up 4 months ago, and I managed to get her pregnant right before we broke up….”

Then it went into a full page of details about the pregnancy, how he was looking forward to being a father, how they were going to try and work through it and that “you may not hear from me from me for awhile”

At the very end of the letter it said,

He’d CC’ed about 20 other girls on the message.

I did what I should have done all along. I clicked on the message, hit DELETE and logged off for good.

Part of me wishes I would have written back and said:

Have any of you ever tried online dating? What were your experiences like?