At the end my last year of university I was given the task of writing a 40 page paper on the film Menace II Society as a final project for a 4th year Linguistic Anthropology course. I had to transcribe portions of the film, do a linguistic analysis of them and then relate them back to Anthropological theories. I don’t think anyone should have to watch the film Menace II Society more than two or three times, let alone the 40 times I had to watch the movie in order to write this paper.You know what repeated viewing of this film does to a person? It drives them insane.

So, what’s a girl to do when her head is full of images of gunshot wounds and sociopath teenagers killing each other?

Watch back to back episodes of the show SCRUBS.

Spending some time within the sterile walls of Sacred Heart Hospital with its goofy doctors and even goofier janitors, was the perfect escape from my personal hell of academic papers and fictional urban violence. I’m also of the firm belief that the solution to most problems can be found within one of Zach Braff’s voice-over monologues.

About two months ago I was going through this phase where I had a ton of freelance work to finish but, I felt totally lethargic and uninspired. The solution to this problem was clear:

I went online and discovered that there was actually 2 seasons that I had never seen before (SAY WHAT!) which was basically like discovering the TV holy grail. I downloaded all of them and prepared myself to be healed. Eight Zach Braff inspirational monologues later, I felt much better.

The episode that inspired this blog post is called “My Cuz“. In this episode J.D and Elliott discover that their respective exes, Kim and Sean are dating each other. Things are super awkward until J.D says to Sean:

“We’ve slept with the same woman, therefore we are Wiener Cousins” 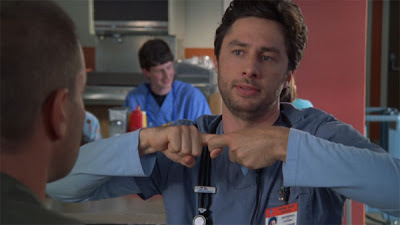 {The Wiener Cousin handshake. “It’s a bond closer than family”}

Later, Elliott decides that this makes her and Kim “Bajingo Sisters“ 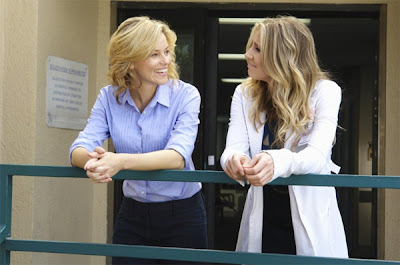 {Bajingo Sisters. It doesn’t have to be awkward. Or, does it?}

Despite having dated quite a few people, I have only ever met two people who have slept with people I have slept with (that I know of). The first one I don’t really count as a true Bajingo Sister since she dated an ex of mine when they were 14 (I’m pretty sure there wasn’t a whole lot of “quality sex” happening at that age). I met my first real Bajingo Sister when I was in third year university.

On the night in question, I was at a club hanging out with an ex-boyfriend that (at the time) I was trying to maintain a friendship with. It should be noted that after we had broken up, I had a super awkward one night stand with one of our mutual friends, a guy that we will call Chandler. At one point during the evening my ex grabbed my arm and pulled me towards a group of people. He then introduced me to a very pretty girl with long dark brown hair.

“Simone this is Natalia”

Natalia was Chandler’s ex – a girl he’d often reminisce about, giving me the impression that she was “the one who got away”. We had never met.

My ex, never one to be known for his tact, added:

“Natalia, this is Simone…SHE’S HAD SEX WITH CHANDLER TOO”

I was a deer caught in headlights. If there was ever a moment where I wanted to be teleported out of my own life, it was this one.

Once the awkward laughter subsided, Natalia and I started talking and we hit it off right away.
We made plans to hang out in the near future.

A few weeks later, we went for dessert & coffee in Little Italy.

Natalia was exactly as Chandler had described her: gorgeous. She had long dark brown hair, olive skin and big brown eyes. She is still one of the prettiest girls I’ve ever seen in person. Natalia was well-spoken, intelligent, thoughtful and all around, quite lovely. Over dessert, we chatted about our lives until eventually we could no longer ignore the elephant in the gelato shop:

Me: “Some of the worst sex I’ve ever had. It wasn’t just him. It was also me. It was just awkward. You?”

her: “To be honest, we dated so long ago, I don’t really remember”

We both burst out laughing.

I think Natalia and I hung out a few times that summer before we drifted apart – something that happens when two people have really busy schedules and don’t know each other well enough yet to keep up the momentum of a new friendship.

Our bond may not have been “stronger than family” like Dr. John Dorian suggested it would be but, I like to think my Bajingo Sister was pretty cool.

***
I came to realize that the ex who had introduced me to my Bajingo Sister had a knack for creating awkward situations. A year later I received the following phone call:

“Hey Simone, I want you to come for dinner with me, my Gay Lover and my Mom“

SCRUBS DID NOT PREPARE ME FOR THIS!

What would I call my ex’s new boyfriend? Would we be WIENER SISTERS? BAZINGO BROS? PENIS COMRADES? SISTERHOOD OF MY EX-BOYFRIEND’S TRAVELLING SEXUALITY?

In this case, “So…how was he?” was a question I wasn’t ready to hear the answer to. Oh & HIS MOM WAS GOING TO BE THERE.

As much as I wanted to be supportive with this new direction his life was taking, even I have limits for how much awkwardness I can endure.

I decided that this was one dinner invitation that I would have to politely decline.

Meeting your Wiener Cousin or Bajingo Sister doesn’t have to be awkward, but it inevitably is to a certain degree.

What do you guys think?