Oh man. I feel like I am back in university again, blogging with the sole purpose of recording my drunken weekend adventures. AGAIN. In my defense, these past two weeks have been brutal work-wise. This week I worked six days straight, the week before also found me wearing a suit & working on a Saturday. When I come home feeling exhausted, sitting down to write something coherent just.doesn’t.happen. However, I promise that once my body stops feeling like its dying (soon I hope!), I will write something for you guys that is more thought provoking than another tale of me attempting to party like I am still 21 (unless, that’s what you honestly come here to read. In that case, its your lucky day!)

Remember how I was saying that I miss hanging out with my Gay Boyfriends? Well, this weekend a couple of my favorite guys were in town. I hadn’t seen most of them in YEARS so, we all met up in the Gayborhood for a reunion of sorts. It was a really fun night however, it didn’t start off that way.

I was running late on Saturday night. I was walking down my street getting ready to hail a cab when SNAP, I broke the heel off of my brand new shoes. Bummer! I started to do the “one leg shorter than the other” shuffle back towards my place when, the paper bag carrying my drinks BROKE. Bottles of blue coolers fell from my hands and started rolling off the sidewalk into oncoming traffic. As if it wasn’t already embarrassing enough that I had decided to purchase vodka coolers, there I was, with one leg shorter than the other, shuffling around in the middle of the street, trying to save said coolers. I’d pick one up only to drop another. I finally managed to grab all six of them in my arms. I hunched over and held them closely to my chest while I hobbled my way back to my apartment to change shoes. For the first time I can honestly say that I was probably the sketchiest looking person on my street. 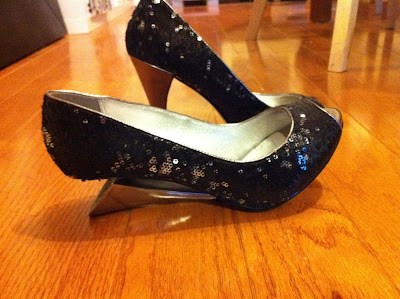 {I was so sad I didn’t get to wear these! I thought the Gayborhood & sequined shoes would be the perfect pairing. sigh.}

By the time I made it to my friend Evan’s apartment, I was flustered and in desperate need of a beverage. When I told the boys what happened, Evan says:

“Whenever we hang out you always have some kind of disaster moment, or accident or personal injury”

That’s when we started swapping stories from the past ten years.

Steve: “I think of you whenever I shower”
Me: “Um, Steve?”
Steve: “No, not like that! Whenever I am drying off and I notice my towels are smelling less than fresh, I think of that guy you dated – the one who had the funky smelling towels that always smelled a bit like B.O”
Me: “YES! MILDEW GUY! I totally forgot about him”
Steve: “I’m glad you went out with him. He reminds me to change my towels. I don’t want to be THAT GUY”

Evan: “Whenever I’m on a date with someone new, I always think of that story you told me about that guy you went out with & how the first time you tried to go down on him you noticed something stuck to his…..”
Me: “Oh God. TOILET PAPER GUY”
Evan: “He sure knew how to kill the romance”

****
Steve: “Remember that time you made perogies & stuffed peppers for me and Jeff?”
Me: “Yes, and Jeffrey ended up getting sick with diarrhea and spent an hour locked in my bathroom?”
Steve: “No, that was me”
Me: “Are you sure? I feel like it was Jeff”
Steve: “I remember because you went and bought some Imodium and slipped it under the bathroom door. No one has ever done that for me”
Me: “Made you perogies or bought you Imodium?”
Steve: “Both. Which, reminds me…can you make me perogies sometime?”

Talking about our memories from the past ten years made me realize a couple of things.

a) I love these guys. I don’t need a new Gay BFF. I already have the best ones.
b) I’m associated with some truly disgusting stories.

The rest of the night involved lots of neon colored cocktails (ok, maybe I was the only one drinking them. The boys drink beer & vodka tonics), a 1990’s Janet Jackson living room dance-party & lots of “I miss you! I’m so glad you’re here” hugs between old friends.

Correction: The night actually ended with us going back to Evan’s apartment where we ate pizza and drunkenly took turns trying to use his ab-roller*

I wish I had video-recorded it because really, it was quite hilarious.

We looked like THIS except, we weren’t wearing red shorts, we were hopelessly uncoordinated & we all ended up on Evan’s living room floor, rolling around, laughing hysterically.

Hey, you try doing this exercise with a straight face. Its not easy.

*FYI. Don’t try this at home. Home gym equipment & alcohol do not mix. I have the bruises the prove it.

And now, back to regular scheduled programming.

How was your weekend?